What is a Pareto Chart?

A type of chart with both bars and a line graph shows that discrete values are illuminated by dropping order by bars, plus the cumulative total is represented by the line. Such a type of chart is known as the Pareto Chart. 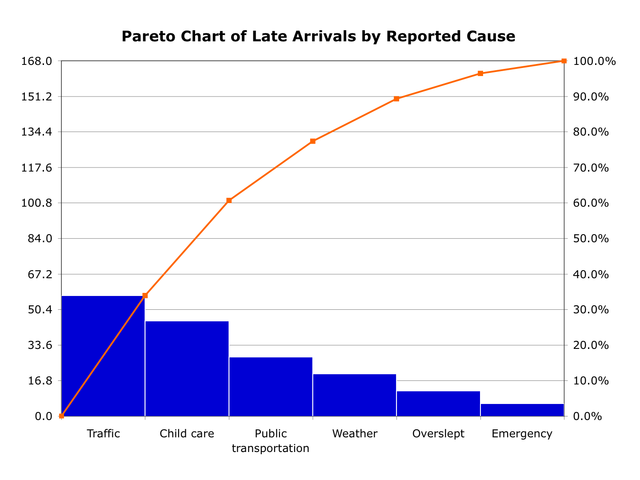 The Pareto principle is the main idea behind this chart. A Pareto principle says that roughly 80% of consequences come from 20% of the causes for many outcomes. This principle comes from the Vilfredo Pareto and the chart is based on the Pareto Principle, which’s why the name the Pareto Chart.

In other words, for the definition, we can say that Pareto Chart tells us the frequency of defects along with the cumulative of their impact. This Pareto chart helps us to seek the defects to prioritize and then, based on those priorities. We find which part is to be improved first or is important and necessary to improve.

The Pareto Chart’s history goes back to 1896 or 97 when an Italian economist Vilfredo Pareto devised a formula representing the uneven distribution of wealth in his book Cours d'économie politique. 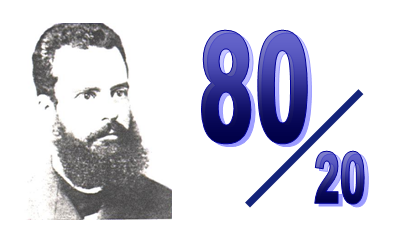 Vilfredo Pareto noticed the few people have the majority of the wealth, i.e., 20%. He then derived the logarithmic mathematical imitation from illuminating this un-balanced distribution of wealth among the people. The other person, named M.O Lorenz, made a graph to visualize Pareto’s work.

After this, Dr. Joseph Juran illuminated that what the economist Pareto had derived was the universal principle applied in many different situations, not only just in economic and finance types of work.

According to its definition, the Pareto Principle is also known as the 80/20 Rule that 80% of consequences arrive from 20% of the causes. 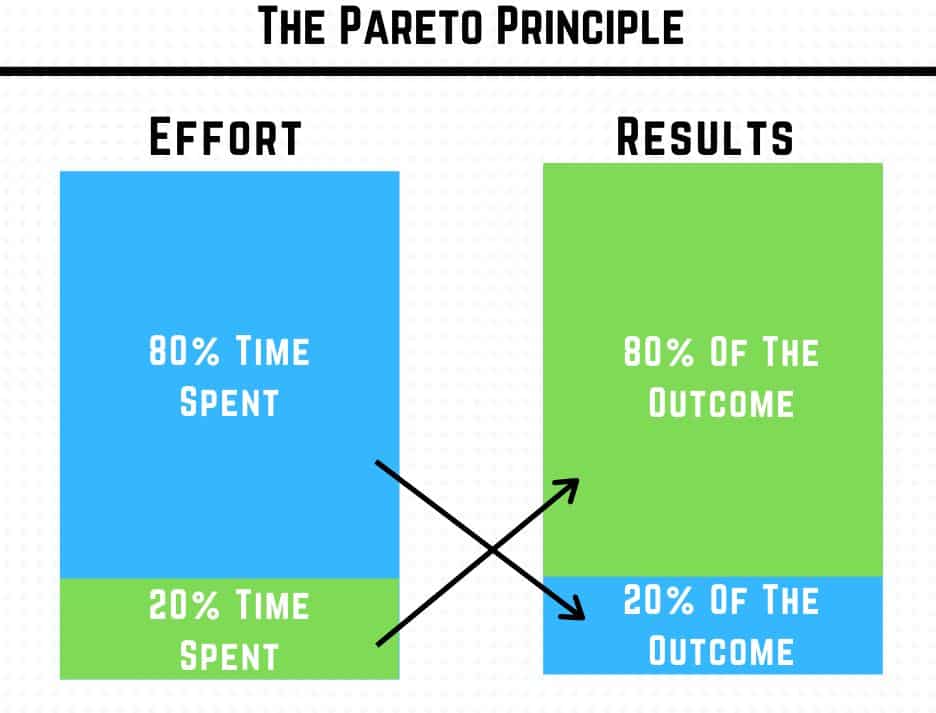 Parts of the Pareto Chart 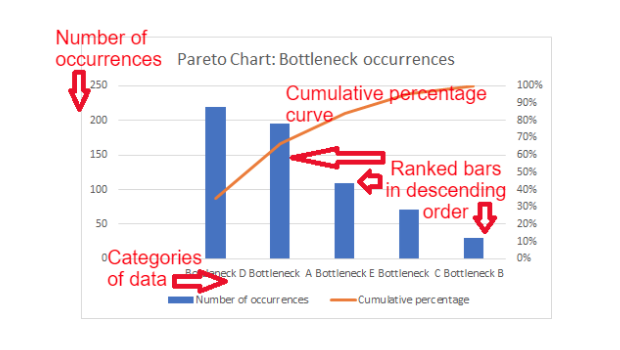 When to Use Pareto Charts

The Pareto Chart is used when:

Look how to use a Pareto Chart in Six Sigma.

Advantages and Disadvantages of Pareto Charts

The Pareto Chart has many advantages, some of them are described below,

Some of the disadvantages are listed below,

Differences between the Pareto Chart, Histogram, a Bar Chart

The bar chart is also different from the histogram as the bar does not need to touch another bar but touch each other in the histogram. Learn more about the differences between histogram and bar chart.

In the Pareto Chart, the bars are always in descending order (from tallest to shortest), but in the histogram and in the bar chart, the bars can be made in any order.

Plus, the Pareto Chart also uses the line graph, which means the line graph rises from left to right, which is quite different from the bar chart or histogram.

How to Make a Pareto Chart in Excel?

The Pareto Chart can easily be made in Microsoft Excel. Here are the tutorials. 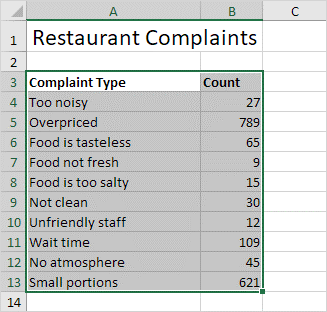 Step 2: Go to [Insert] Tab, which is in the charts group, and there click the histogram symbol. 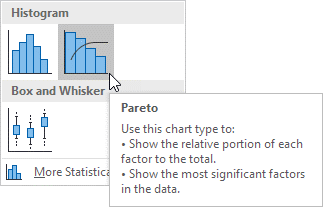 Step 4: See the result and check the diagram 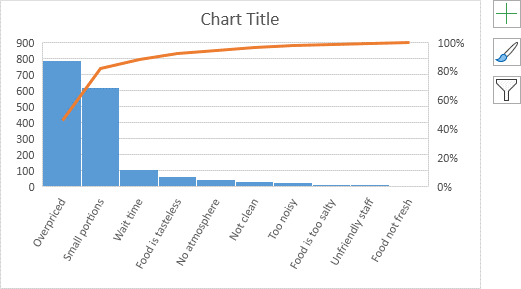 Step 5: Click the + on the right side of the chart. From there click the check box next to the data labels. 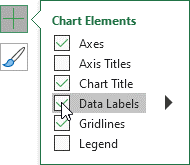 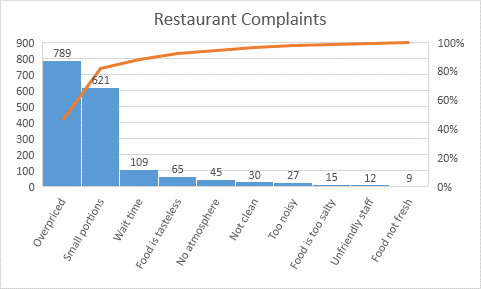 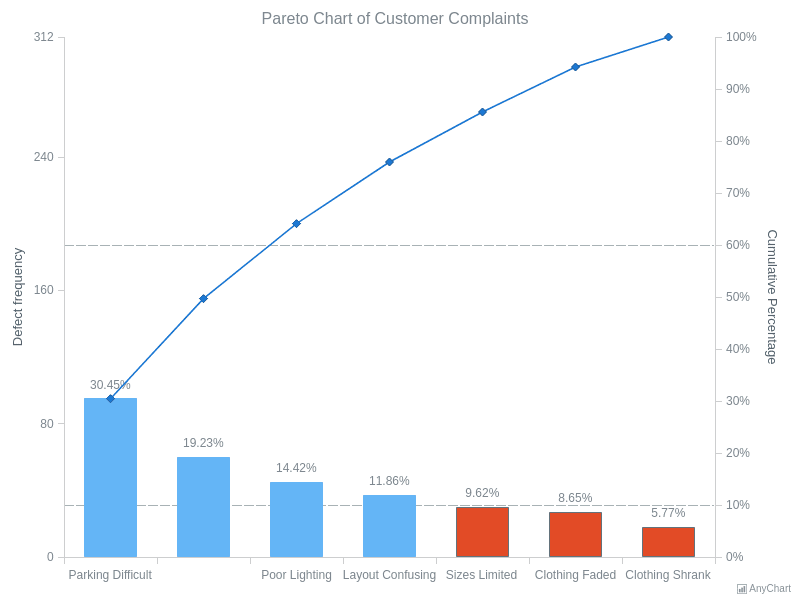 This the example of the Customer Complaints Pareto Chart. As we can see the major cause of all problems is the Parking Difficulty and should be mitigated first. The problems according to their severity are designed on the chart. The problems are represented in the bar graph format while the cumulative impact is embedded in the line graph.

According to this Pareto Chart, parking difficulty, sales representative's rudeness, plus poor lighting affect the business more. So, now the company will mitigate them first.

There are hundreds of tools available over the internet to make a Pareto Chart for your purpose, but there is also one tool named EdrawMax, which makes your Pareto Chart more efficient and is highly recommended. 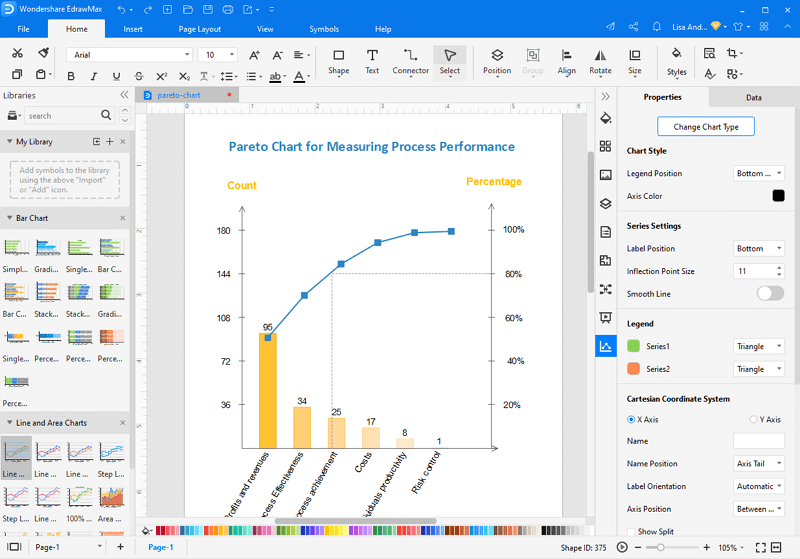 Security Verified | Switch to Windows >>
Related Articles
Pareto Chart - A Six Sigma Tool for Measuring Process Performance What is an Entity Relationship Diagram (ERD)? - All You Need to Know What is a Stakeholder Map? Process Flowchart Enterprise Application Diagram Software
Create a Pareto Chart with EdrawMax.
Try it Free
Popular Now
7 Best Electrical Drawing Software in 2021
Wondershare MindMaster Has Now Been Rebranded As Wondershare EdrawMind
How Can EdrawMax Add Value To Your Work?
Basic Electrical Symbols and Their Meanings
Free Mind Map Software
What's a Program Flowchart? | Definition & Examples
Flowchart Symbols and Their Usage
Explain Algorithm and Flowchart with Examples
A Complete Guide for Personal SWOT Analysis with Examples