Posted by James Freeman | 07/20/2021
A Pareto chart is a histogram drawn in nominal frequency order to indicate the ratio of results caused by various elements. It is one of the most effective tools in Six Sigma for measuring process performance.

What is Pareto Chart?

Pareto chart, one step of Six Sigma chart which combines a bar chart and a line chart, is observed by an Italian economist Vilfredo Pareto and generalized by Joseph M. Juran. Previously the main function of this chart is to evaluate which might be the most common cause of the deficiency. Later it is widely used to emphasize the importance of reasons among all elements.

The horizontal axis of a Pareto chart shows main elements which influence the quality of a program. The sequence of those elements is less and less important from left to right. Besides, left vertical axis of the chart represents the frequency of occurrence while the right vertical axis shows the cumulative percentage. Thus, the height of each bar acts as influencing the degree of each element and the upper line indicates the cumulative frequency line. 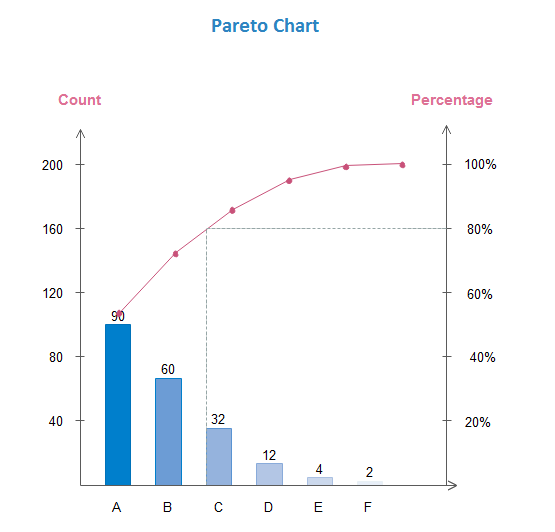 How to Measure Process Performance in Six Sigma by Using Pareto Chart?

After clarifying the metrics for measuring process performance, the Pareto chart has a basic structure to be analyzed step by step.

3. Sum up the Result

After analyzing most influential factors in affecting performance, you can put forward a summary of how to measure process performance by Pareto chart.

Below is a pareto chart example create with Edraw. Click the image you can download the template and customize it.

Download Edraw to Create Pareto Chart and Many Charts and Graphs:

Use SIPOC for Six Sigma