A flowchart is a graphical representation of various logical steps of a program. These expressions use several shapes, including the geometric ones, to show the step-by-step process with arrows while establishing a data flow. There are 21 different types of flowcharts, and a programming flowchart is one of them.

The program flowchart is a data flow that shows the data flow while writing a program or algorithm. It allows the user to explain the process quickly as they collaborate with others. These programming flowcharts also analyze the logic behind the program to process the code of the programming. The programming flowcharts can serve in different ways. For example, they can analyze the codes, visualize and work on them. They can also help figure out the application's structure to realize how a user navigates in a tool.

The programming flowcharts improve the condition and efficiency of work. The tool has four basic symbols that have code written on them for programming. They give commands like start, process, decision, and end, and these symbols are the crucial part of the programming flowcharts. They help in forming a relationship between various elements to describe the data flow.

Benefits and Drawbacks of Programming Flowcharts

The Benefits of Programming Flowcharts:

The Drawbacks of Programming Flowcharts: 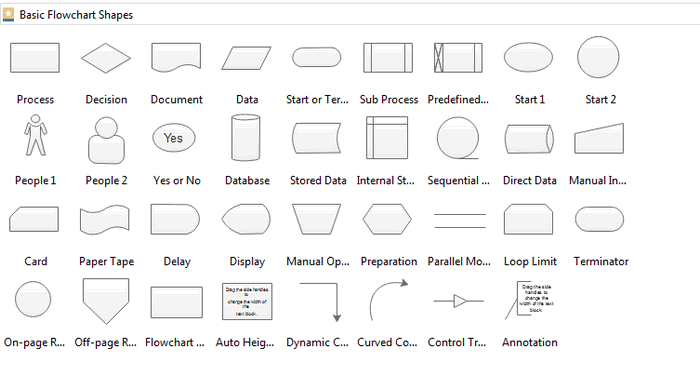 1)Find Out the Purpose of the Programming Flowchart

As for the symbols, an engineer can pick several symbols as per their choice. They need to know the meaning of the symbols properly as they are working. Without the proper symbol, the engineer may fail to produce the whole programming flowchart. They also need to decide the chronological order of the working process by reviewing any pre-existing documentation of the step. They can also make a rough estimation of the tasks before creating an actual programming flowchart.

The program design can include shorter texts and single keywords to make the flowchart look more concise and efficient. Moreover, it added a sense and preciseness while stylistically improving the programming flowchart's quality. They also need to sort the shapes by their type and use. For example, they can use symbols of input/ output or process, and for that, they need to plan the shapes.

4) Place the Shapes and Symbols

The designer can now place the shapes and symbols while working on the logic flow in a programming flowchart. There are some specific symbols to express a particular thing or function. Once the designer has finished lining out the program or applying the symbols, they must place the arrows to connect the shapes. To save time while preparing for programming software, the user can also click on the floating button.

5) Check the Logical Structure of the Flowchart

After finishing the whole flowchart, the designer must carefully go through the programming flowchart to determine if they have skipped any step that can disturb the programming flowchart's overall logic. The designer must check their work thoroughly as soon as they finish the logical structure of the flowchart. They must look for the bugs present in it so that when they will use it in the future for debugging, analysis or modification, the flaunty structure may not hinder the process.

Why EdrawMax for Programming Flowchart Making

When a designer is looking for an online tool to work on their programming flowcharts, they mainly concentrate on picking the user-friendly one. The process of programming flowchart is, in general, complicated in nature, therefore choosing an online tool that is good for an inexperienced user is very much preferable. They can use EdrawMax for better examples. Here are the reasons why EdrawMax is the best:

Finding the most significant number among the three numbers:

Programming flowchart: With the help of a programming flowchart, determining the most significant number becomes easy. The flow chart starts with a terminal name "start" and then gradually proceeds through the stage "declare variable a, b & c." The input for the program is "Read a, b & c." The process of decision-making takes on from this part. First, the logic flow determines if a is greater than b. If this is false, then it goes on to determine if b is greater than c. If it is true, then the given command is "print b." If b>c ends with the decision false, then "print c." If a>b is true on the first stage, then the command furthers with a>C. If the decision is true, then the command is "print c," and if it is false, then "print a." The whole process ends with the stop terminal. 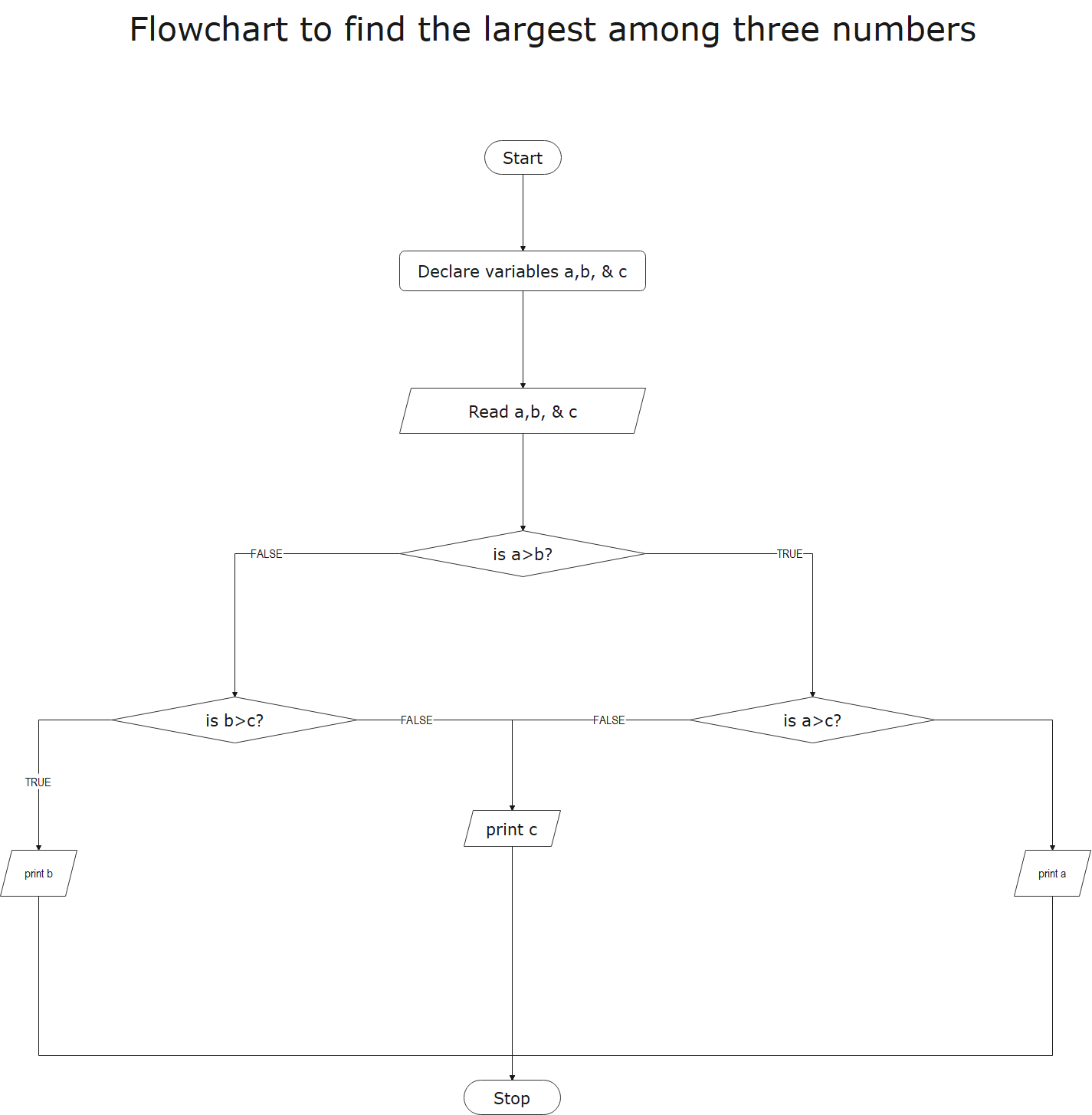 Comparing the flowchart with other programming languages:

// Java Program to Find the Biggest of 3 Numbers

// Function to find the biggest of three numbers

// Calling the above function in main

Here is a programming flowchart that shows the hiring process that starts with "identifying staffing needs." The flowchart defines the job description, sending personal requests, which are a part of processing. In the diagram, several processings works land on the decisions with yes, no answers. For example, the decision to select suitable candidates continues to a yes and a no. If the answer is yes, then the process continues with arranging meetings and then having meetings. For the no answer, the company needs to look into the other resumes to find another suitable candidate. The whole flowchart ends with rejection or acceptance of the references or the candidates. 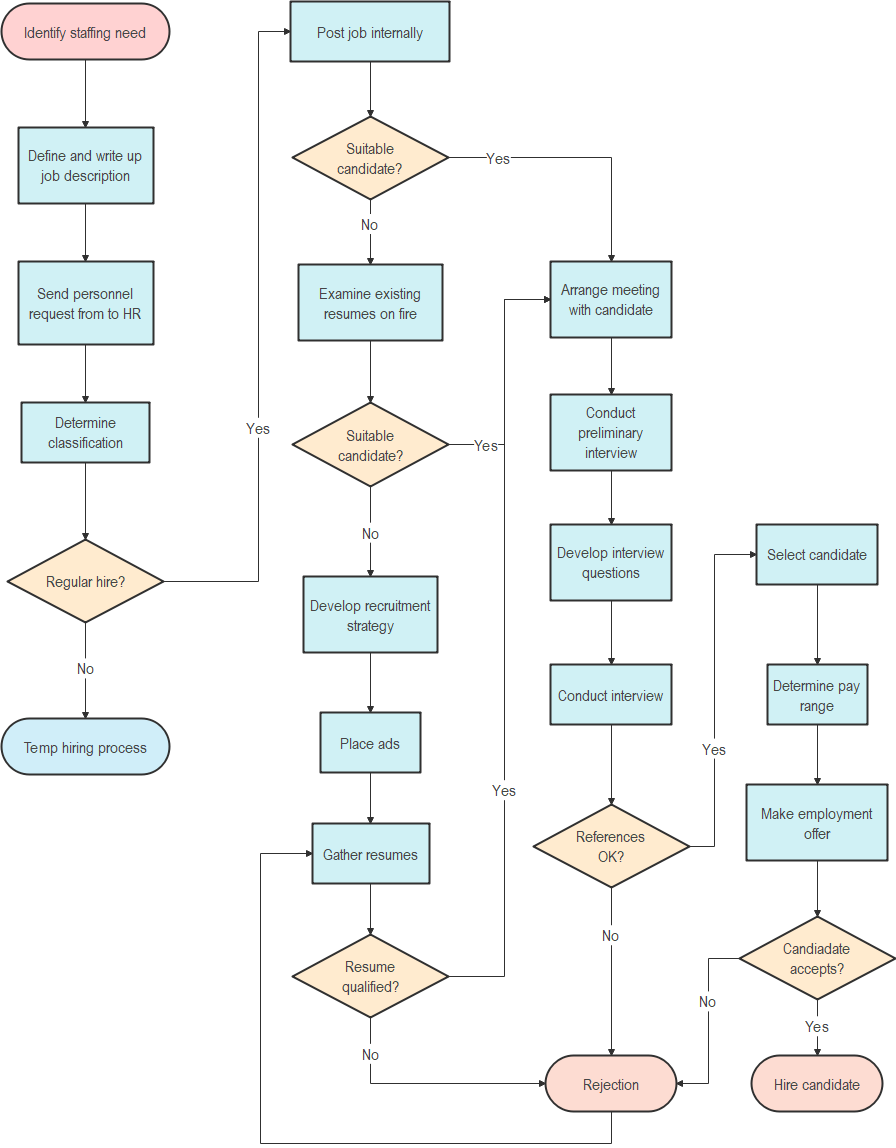 The process starts and then continues with the concept, which is a part of processing. There can be two decisions. If it is a yes, then the project continues with validating the feasibility and creation of documents like project charter and risk assessment; with the project's continuation, the document like budget, project plans, communication plan develop. With the implementation of the project and benefits realization report, the project gets its "closure." The whole procedure completes with an "end" terminal.