Posted by Allison Lynch | 07/30/2021
Here provides a rich set of flowchart symbols, which shows steps in the sequence and is widely used in visually illustrating the flow of algorithms, workflow, or processes.

There are various flowchart shapes used for drawing different types of flowcharts. Each flowchart symbol has its own meaning and context where it is used appropriately. However, whether you want to read a flowchart or try to make one by yourself, knowing the common symbols and what they represent will make things easier. Here, you will see the 5 flowchart symbols that are very popular and commonly used in almost every flowchart.

The Oval or Pill Shape - represents the start/end.

The Rectangle Shape - represents a process.

The Parallelogram Shape - represents the input/output of the information.

The Diamond Shape - represents a decision.

The Arrow Shape - represents the flow of the sequence.

Represents a sequence of actions that perform specific tasks within a larger and more complicated process, routine, or module.
Predefined Process Symbol

Indicates a set of steps that combine to create a complicated process that is defined elsewhere, often on another page of the same drawing.
Delay Symbol

Represents a delay in the process. In Process Mapping, delays are often important as they may result in adding to the cost of the product or simply delaying its production.
Preparation Symbol

Indicates the set-up to another step in the same process.
Manual Operation Symbol

Represents a process step that should be performed manually, not automatically.
Parallel Mode Symbol

Branch and Control of Flow Symbols

Indicates the start/end of a process.
Arrows and Connecting Lines

Use this symbol to connect different elements and show the relationships between the shapes.
Decision Symbol

Indicates a point where the outcome of a decision dictates the next step. There can be multiple outcomes, but often there are just two - yes and no.
Yes/No Decision Point

Indicates a sequence in the process at which the end-user chooses an option, i.e., a "yes-no," or "true-false" response, and then branches to different parts of the flowchart.
On-Page Reference

Use this symbol to connect separate processes on the same page of your flowchart.
Off-Page Reference

Also known as off-page connector or link symbol. Use this symbol to connect separate processes across different pages with the page number written on or within the shape.
Merge Symbol

Indicates that multiple processes or pathes are combined into one.
Extract Symbol

Indicates that multiple processes or pathes are combined into one.
Or Symbol

Indicates that the process flow diverges for more than 2 branches.
Summing Junction Symbol

Indicates a process step that must go to one step other than the typical next step, when specific conditions are met.
Annotation Symbol

Indicates additional information about a step in the flowchart.

Indicates that information is coming into the process from outside, or leaving the process.
Document Symbol

Represents the data that can be read by people, such as a printed document or report.
Multi-Documents Symbol

Indicates where the information will be displayed within a process flow.
Manual Input Symbol

Indicates a process step where a user/operator is prompted to enter information manually.
Card Symbol

Indicates that data is input by using cards. But this symbol is seldom used now.
Paper Tape Symbol

Indicates that data is stored on page tapes. But this symbol is also rarely ever used now.

Also known as data storage symbol. Use this symbol to indicates where data get stored.
Database Symbol

Represents data/information stored in the storage device that allows for searching and sorting by users.
Internal Storage Symbol

Usually used in the software design flowcharts and indicates that data/information is stored in memory during a program.
Sequential Data Symbol

Represents the data that is accessible sequentially. The shape is supposed to look like a reel of tape.

Indicates a process step that organizes data, information or materials into a standard format.
Sort Symbol

Indicates a process step that organizes ata, information or materials into some pre-defined order.

How to Create a Flowchart in Easy Steps

Creating a flowchart is quite simple and requires simple understanding to make one. We will guide you through an example so that it is easier to understand. 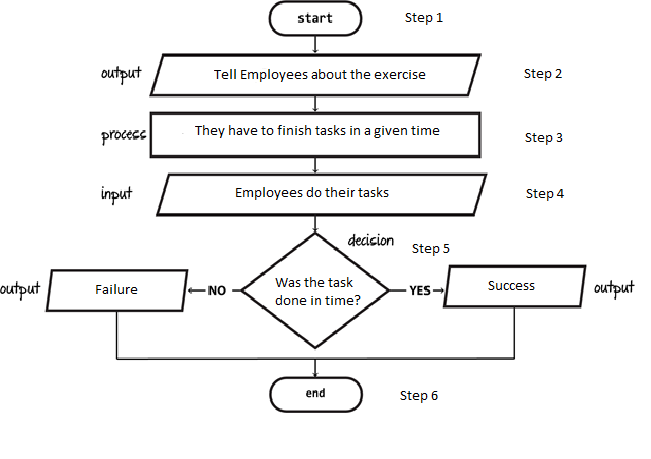 The first step is to use the Oval Symbol to mark the start of the flowchart.

In a conventional flowchart, the parallelogram comes first as it shows the output or input. In this case, the output is recorded in step 2.

In the next step, you insert the rectangle symbol, which represents the process involved in order to get a result.

After the process is demarcated, the parallelogram is inserted again to record the input of the respective process.

This step is where we use the decision symbol or commonly known as the diamond symbol. This symbol is responsible for answering a “yes” or “no” question that is inferred by the input. The Diamond symbol also leads to two different outputs (parallelogram symbols), which record the answer to the Yes and No question.

The last step is to use the Oval Symbol again to mark the end of the flowchart.

The most used symbol in this entire flowchart is the arrow symbol. It links every symbol to the other and lets the Flowchart ‘flow’ through the entire process.

Use EdrawMax for Flowchart Creation

You can use several applications to make flowcharts, but we would highly recommend that you use the flowchart maker of EdrawMax.

All you need to do is download EdrawMax. Once you have done that, just go to ‘New’ and select Flowcharts. You will come across several flowchart templates that you can choose from.

The flowcharts belong to the most basic version as well, and the advanced level as well. It is highly recommended and the perfect application for this task. 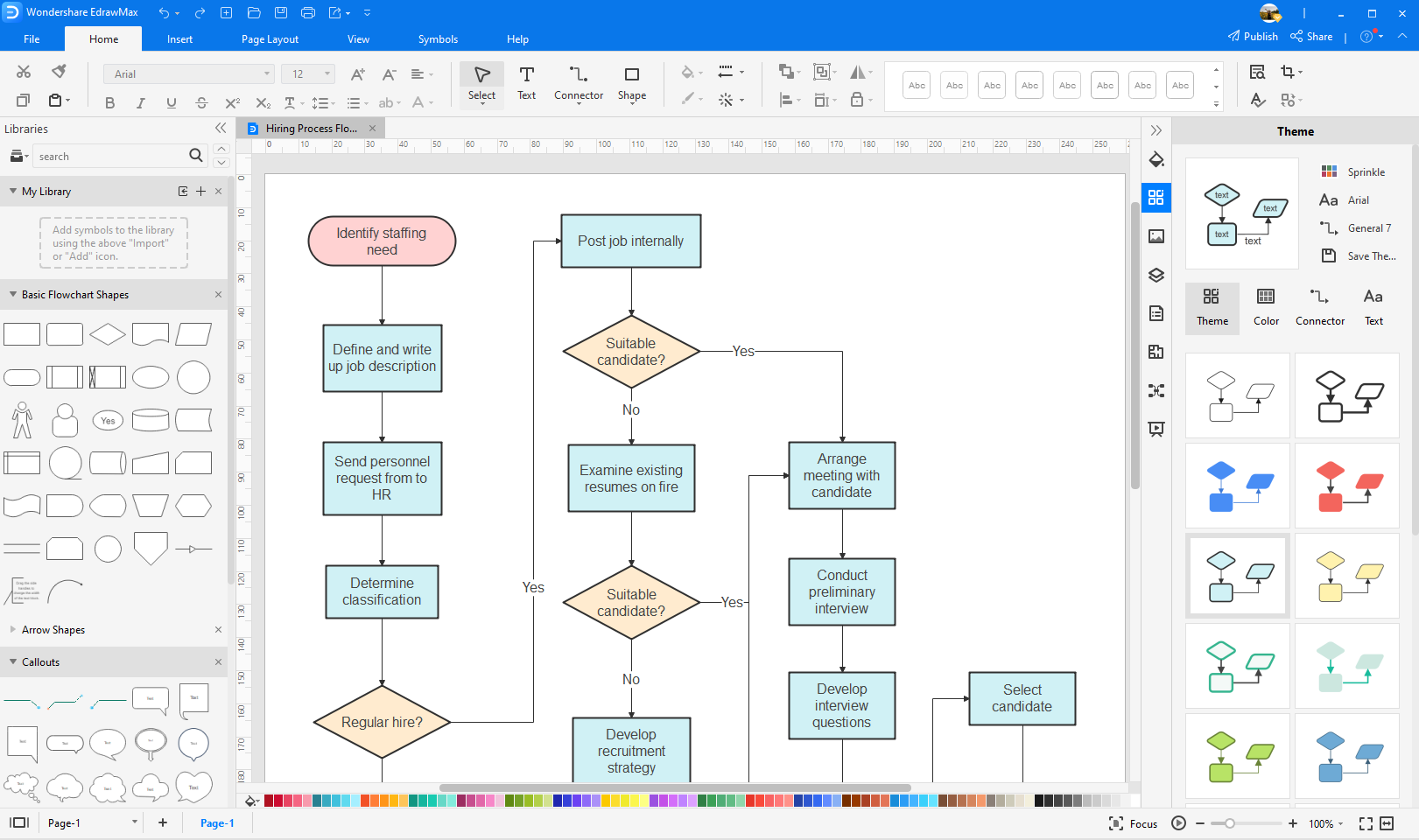 Then watch the following video to start create your own flowchart instanly!

A flowchart is described as "cross-functional" when the page is divided into different "lanes," describing the control of various organizational units. A unit appearing in a particular "lane" is within the power of that organizational unit. This technique allows the analyst to locate the responsibility for performing an action or making a decision correctly, allowing the relationship between different corporate groups with responsibility for a single process.

A workflow diagram shows the relationships among different departments in a fixed work sequence, which means that one department needs to finish its job, so another department can continue the rest. As the workflow shows how your work is completed from start to finish step by step, the development and maintenance of these workflow relationships are very important for managers. Because by seeing how the business works from a top-down perspective, you can identify it’s potential flaws, weaknesses, and areas for improvement. 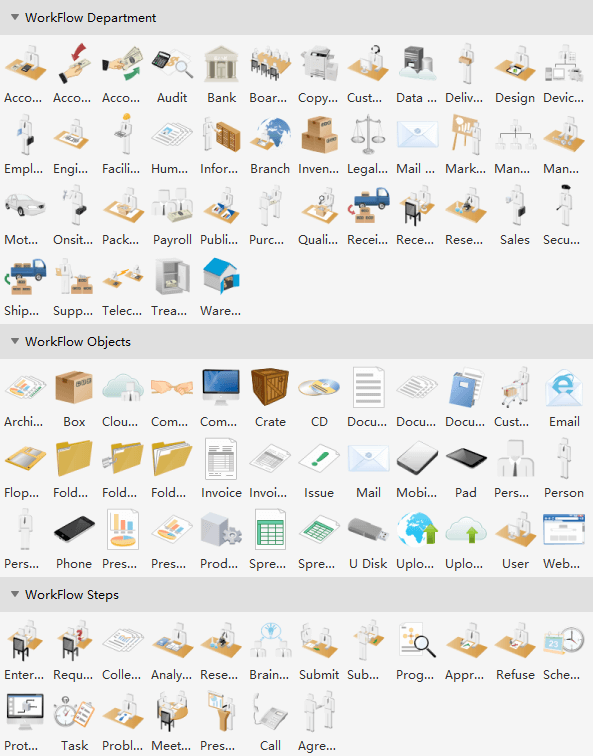 The following shapes are similar to the basic flowchart symbols but are specially used in the audit flowchart.