True Romance from Edraw. Up to 60% Off for this Valentine! Check it now >>
Knowledge

What is a Ceiling Fan?

The ceiling fan is the best mechanical invention that makes people cool physically. It was invented in late 1800. The fan is mounted on the ceiling, and it uses three rotating blades that rotate by the power of an electric motor covered with the metal sheet. And that is why it is known as the ceiling fan.

These fans are less efficient than the air conditions, the invention of this century because these fans are not made to cool down the temperature or humidity, but they just make your sweat go away and make you feel a little cool. The ceiling fan uses electricity to operate. The weather experts suggest using these fans in the cold seasons because they create warm air in the room. 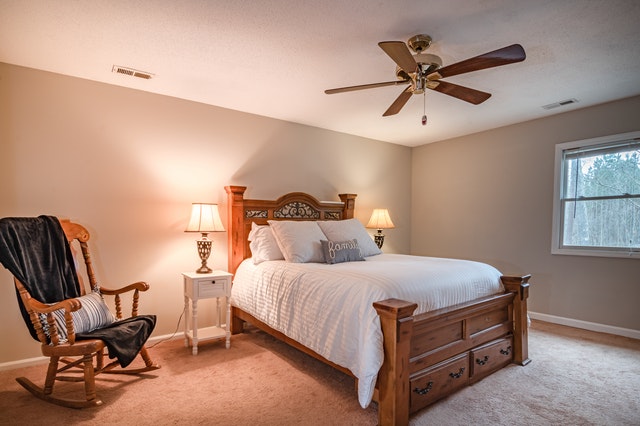 What includes in a Ceiling Fan? 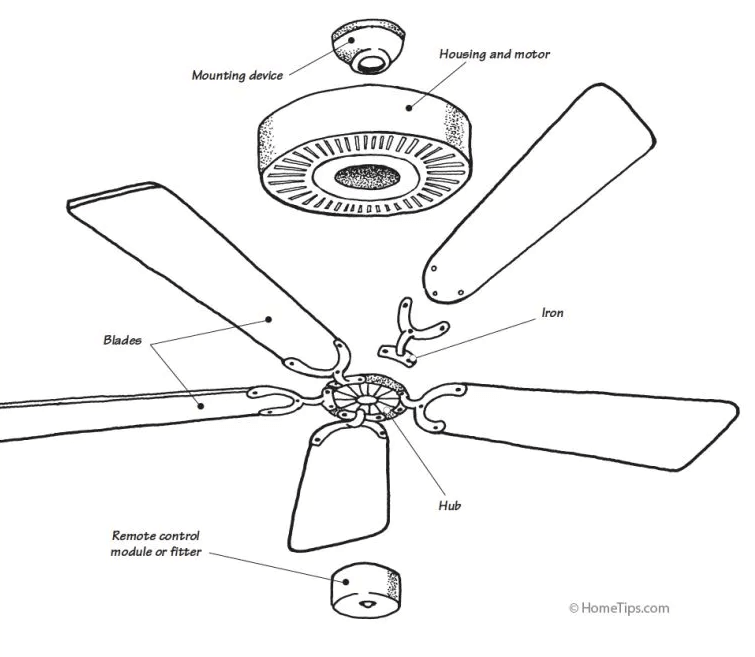 What do the colors of wire mean in a ceiling fan?

Fans come in different shapes and sizes, and so their wiring is also varying, but here we are talking about the ceiling fan and its wires that are mainly four and contain the following colors. 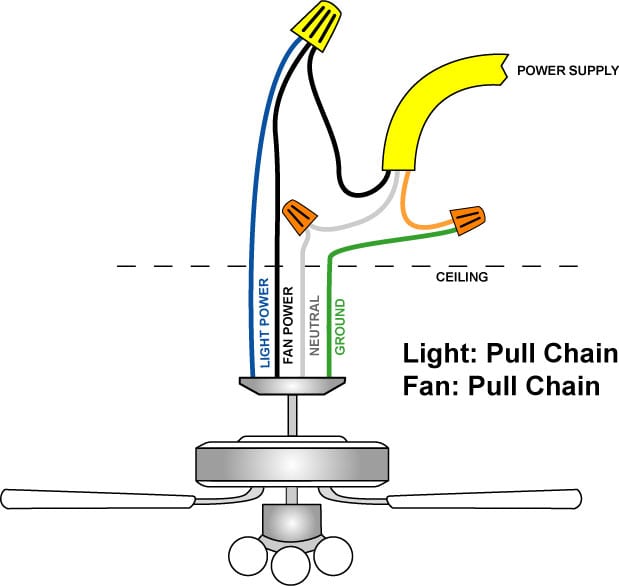 How does a Ceiling Fan Work?

The central concept behind the working of the ceiling fan is that it converts electrical energy to mechanical energy. What happens is that when the capacitor inside the fan makes the fan start, the current passes to the electric motor, and inside this motor are the coils of copper wire. When the current reaches here, it starts producing the magnetic field that makes the fan rotate quickly in the clock-wire direction.

But how the fan cools us?

Remember the concept? The warm air is the light air and always goes upwards, and the cold air is heavy, so it always comes down. The fan makes this process consistent and quick. What the fan does is it attracts the warm air towards itself, where its blades cut that warm air and push the cold air down.

How to wire a ceiling fan?

For wiring a ceiling fan, the best practice is to consult the electrician if it is not available. You should carefully follow the below steps. As for the difficulty, it may be difficult or maybe not, depending on how the steps you are following, when you are about to start account yourself that you contain the right tools with yourself.

Here we will tell you how to wire a ceiling fan controlled by the dimmer or a switch. 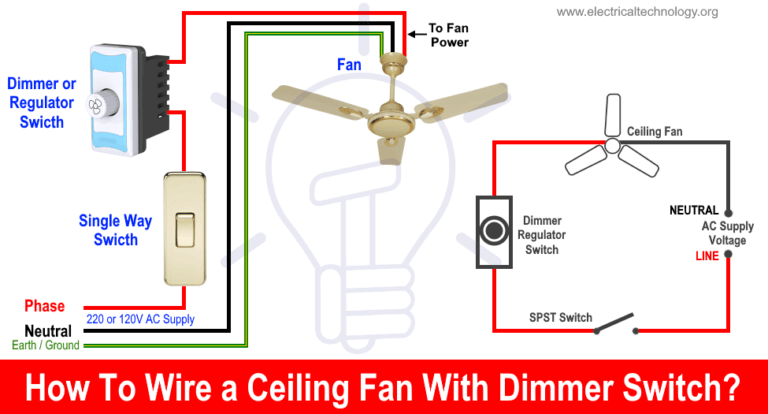 Our concepts become more concrete when we see the practical illustrations of what we studied. So here, we will show you the three commonly used ceiling fan wiring diagrams that will make you quickly understand the bits and bytes of the fans. 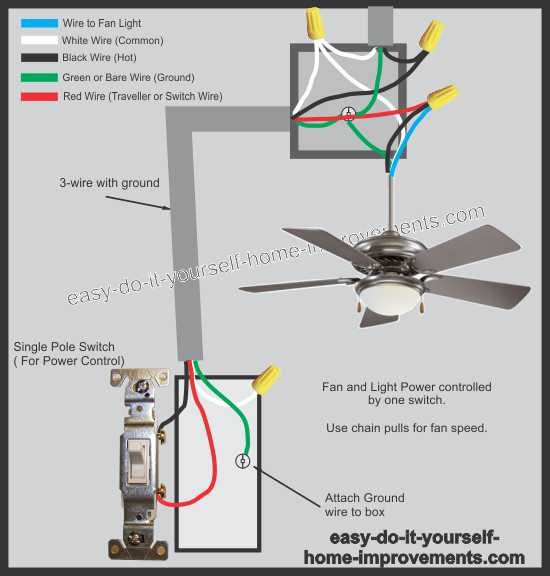 In this illustration, we have five wires here, red, blue, black, white, and green. And the system of this fan is that it also contains a light, and the switch of the fan and the light are the same and connected by a primary red wire. The blue takes the lead after the red wire and going towards the bulb of the fan. These wires are connected with the same steps mentioned above. 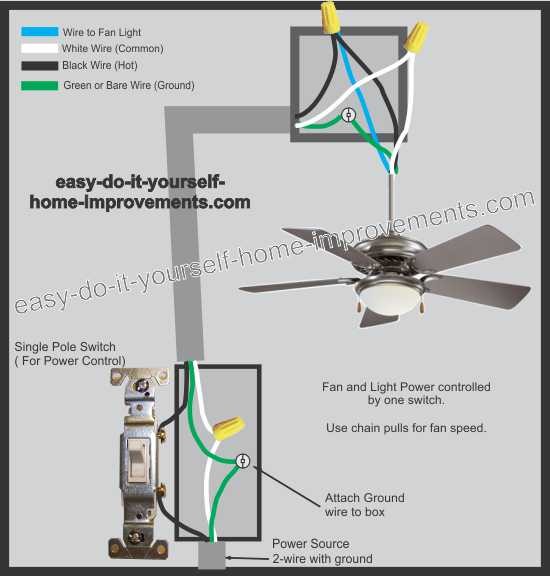 In this illustration, we have four wires blue, white, red, and green. The function of these wires is the same as we have mentioned above. The little difference that comes here is the red wire is not used. Here the fan and light are controlled by the same switch, and the dimmer is not used. The wiring is the same, but this fan gets power from the green and the black wire. 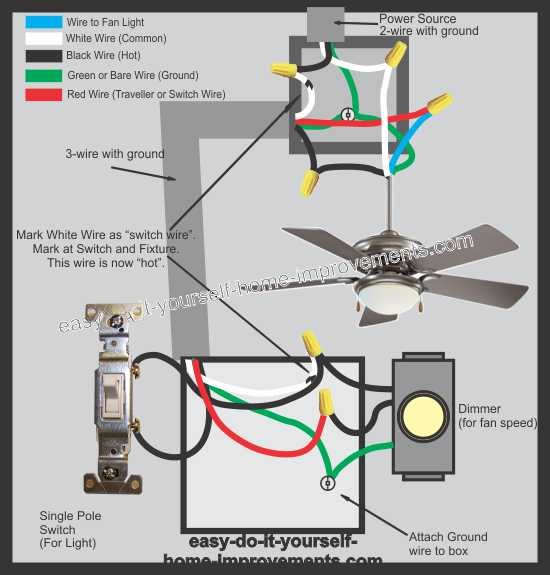 In this illustration, five wires are used blue, white, black, red, and green. Their function is the same, but they connected with the fan and switchboard differently. Here all five wires are connecting in the fan, the main switch for ON/OFF, and the separate light button. The white wire is attached to the ceiling and used as a switch wire here.

Use EdrawMax for Wiring Diagram Creation

Ceiling fans have become the central part of our lives, so wiring them correctly is essential. If you wire them wrong, then they will not function as they should do. Sometimes, wiring the ceiling fan incorrectly makes the motor burn, leading to short-circuits and other failures like short-circuit in the switchboard, etc.

The best and easy-to-use software for making ceiling fan wiring diagrams is the EdrawMax. EdrawMax is entirely free to use diagram-making software that helps you to make diagrams of any region. The software comes with all the essential tools and features that make your work efficient.

Making your diagrams with EdrawMax is so easy that you just have to drag and drop items used in a fan. The software contains all the libraries which will suggest to you in diagram making. You can download your project in any format too.