How a Bill Becomes a Law Flowchart

Do You Want to Make Your Flowchart?

Lawmaking is a technical process. It is a common practice in politics that the bill needs to pass through its initial stages before it becomes law. A thorough discussion and debate help avoid loopholes and unintended consequences. If you are interested in how a bill becomes law flowchart, this can help.

The legislative process is complex, so it is important to visualize how bills make their way through the House and Senate. Understanding it starts with knowing what happens before it passes. Read on to learn how laws get passed and what a flowchart template can do for you. 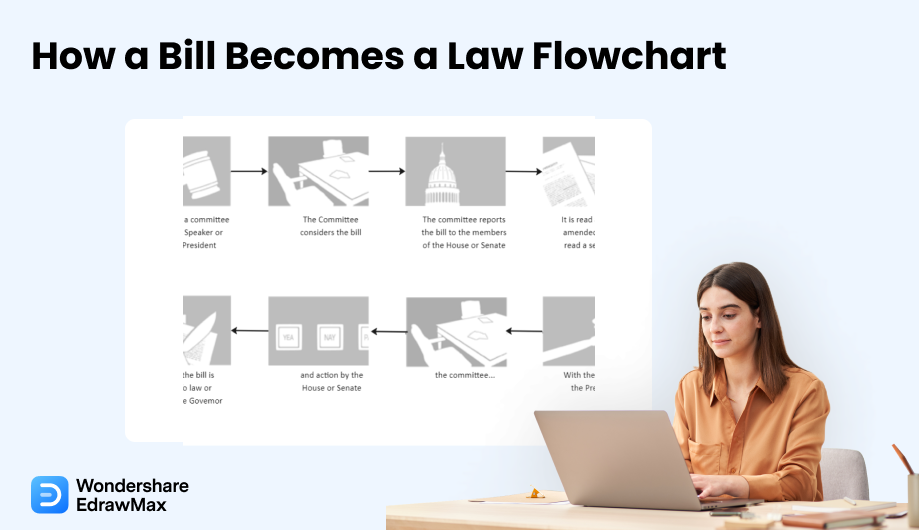 1. The Process of a Bill Becoming a Law

Bills become law by passing through the legislative process. An introduction, debate, and passage make up a significant part of the process. This eight-step guide will answer your online question on "how a bill becomes law flowchart."

The legislation begins as soon as a senator or assembly member writes a bill. Other lawmakers can co-sponsor it if they agree with its purpose. It is a way to bring attention to and show that there is support for it.

After that, a member of Congress introduces the bill. They will submit a copy of the bill, give it an official number, and include the sponsor's name. If a Representative sponsors the bill, it goes to the House. A senator must sponsor the bill to introduce it in the Senate. There can't be any action on a bill before 30 days have passed.

Step 3: Send the Bill to the Committee

The parliamentarian for the House or Senate usually makes the final decision about the referral. Policy committees review bills based on their subject expertise. Each of these committees has members from both parties and does research, holds hearings, and votes. They also make recommendations to their respective chambers on critical issues.

Step 4: Assessment of the Bill by the Subcommittee

Next, the bill goes under review and discussion by the subcommittee assigned by the chairperson. Both Houses of Congress can amend and change it before voting on it. Bills in both chambers may have amendments attached to them, which can significantly change their content.

Step 5: Hearing of the Bill by the Full Committee

The full committee receives the results from the subcommittees. In a markup session, the committee will make changes and additions. If there are significant changes to the bill, the committee might require a clean bill containing the changes.

If there are any committee amendments, the chamber must accept, alter, or reject them before voting. A bill has to get a majority vote in the committee. Unless a committee recommends a bill to Congress, it expires.

The bill goes to the floor after the committee approves it. This new bill will replace the previous one with a new number.

The debate is open-ended unless there is cloture. Discussions are open to members for as long as they want. It is possible to propose entire legislation as an amendment to another bill. In a debate without cloture, senators can try to kill a bill by talking about it to death.

Step 7: Conciliation of the Conference Committee

The Conference Committee handles bills if the House and Senate adopt different versions. A Conference Committee reviews most of the significant legislation. Reps from both Houses get together to resolve disagreements. It's usually a committee of seniors selected by the chairpersons from the committee that deliberated the bill first.

Before the bill reaches its final stage and becomes a law, committees, subcommittees review it, and sometimes even special interest groups. If approved, the bill moves on to the next step of its legislative process.

Step 8: Decision of the President

Then, if both Houses approve the bill in the same version, the president signs it into law or vetoes it. The bill gets signed into law if there is approval given to it. If Congress is in session and the president doesn't act, it systematically becomes law.

The bill does not become law if Congress adjourns before the 10-day mark and the president has not signed it, and Congress may not override it by voting. In addition, if the president vetoes a bill, it must have approval from two-thirds of each House to become law.

2. Visualize How a Bill Becomes a Law Flowchart

Congress reads and considers any bill before it goes to the president. Although this sounds like the easiest part, there is more to it. We know it is confusing and time-consuming to figure out how a bill becomes law. Flowcharts can show how bills move through the legislative process and eventually become laws.

Below are some how a bill becomes a law flowchart templates for your use in class, reading, or if you need one for work.

How a Bill Becomes a Law Flowchart Template

If you're looking online for "how a bill becomes a law flowchart," this template should hold your attention. It is a simple way to explain the complex process of passing a bill. This flowchart template makes it easy for viewers to understand.

Click to download and use this template.
While The eddx file need to be opened in EdrawMax.
If you don’t have EdrawMax yet, you could download EdrawMax free from

below.
How a Bill Becomes a Law Flowchart

How a Bill Becomes a Law Flowchart Blank Template

If you're teaching about legislation, you are probably finding online "how a bill becomes a law flowchart blank." Below is a worksheet you can use to get started. You can use this flowchart template to teach your students or use it for quizzes. 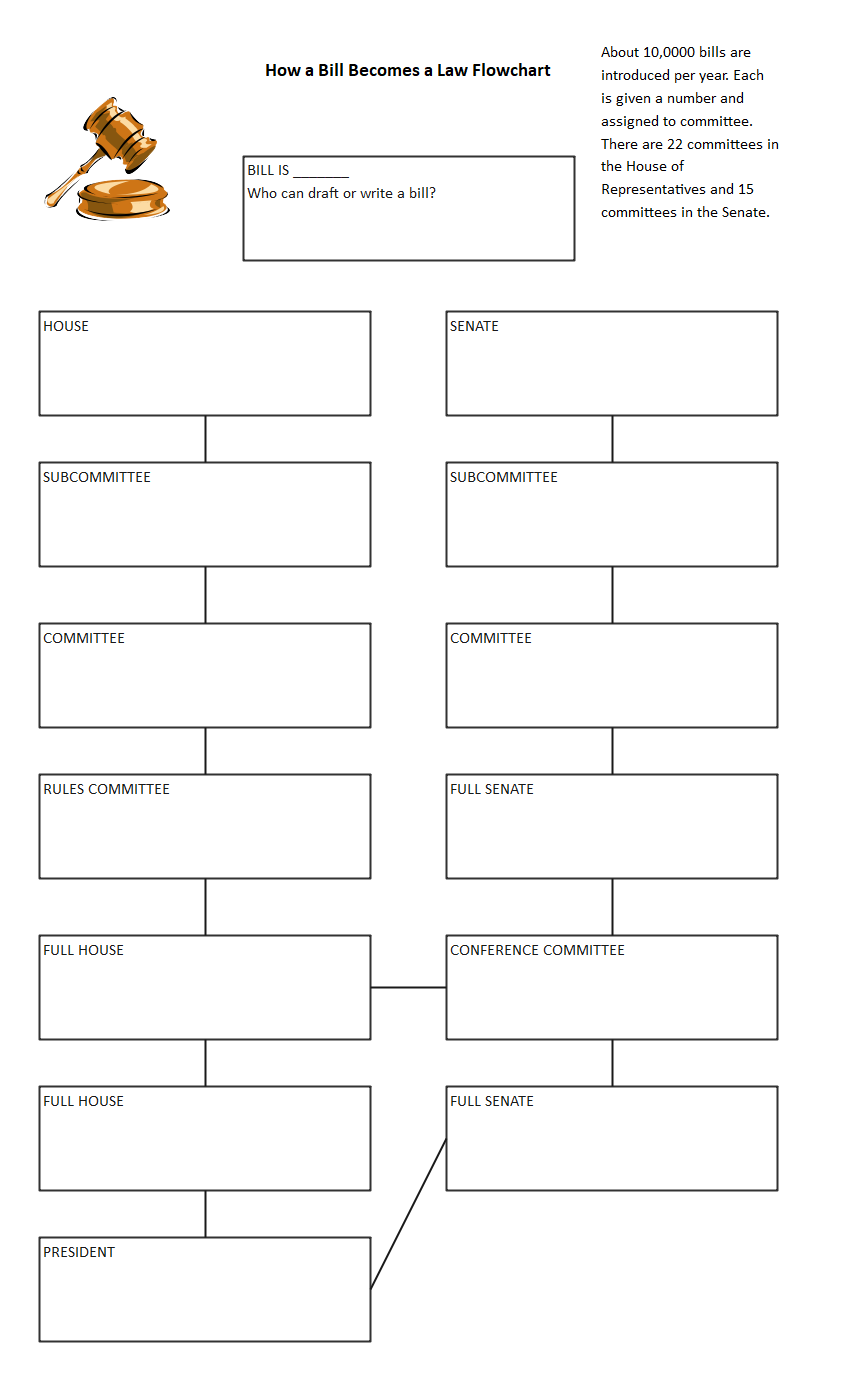 Click to download and use this template.
While The eddx file need to be opened in EdrawMax.
If you don’t have EdrawMax yet, you could download EdrawMax free from

below.
How a Bill Becomes a Law Flowchart Blank Template

EdrawMax is the diagramming and data visualization tool that makes your ideas come alive. It has an impressive library of 26,000+ symbols and 1500+ templates, making it one of the most versatile diagram tools.

In addition, EdrawMax provides a collaborative and engaging experience for teamwork on an infinite canvas. You can also save time and have your visual ready in minutes because EdrawMax makes it easy to export to different file formats. If you want it to reach more people, you can also share your visual plans on social media with EdrawMax.

3. Frequently Asked Questions About a Bill and Law

A bill is a legislative proposal in the U.S. It expires if lawmakers don't vote for it or the executive rejects it. Without authorization, it doesn't become law.

So only after a bill gets enacted and signed that it becomes law. Statute or Act of Congress is another term for law. It is a set of regulations put into action with the aid of law enforcement.

Any bill that is not approved and made law before the conclusion of the second congressional session "dies." The next Congress can reintroduce a dead bill with a new bill number. It may be necessary for a researcher to follow several related measures over successive Congresses. Later laws on the same subject may refer to materials created in past Congresses.

Following its submission to the president for signing, a bill may experience the following outcomes:

A bill must include critical elements, such as a title, an enacting clause, sections altering and repealing laws, and an effective date.

The essential elements of a bill include the title, enacting clause, clause, and number. Other bill elements are optional. It comprises the interpretation provisions and the preamble. 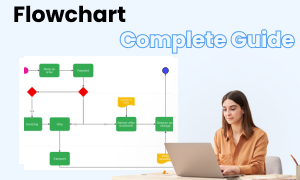 Check this complete guide to know everything about flowchart, like flowchart types, flowchart symbols, and how to make a flowchart.