Do You Want to Make Your Neural Network?

EdrawMax specializes in diagramming and visualizing. Learn from this article to know everything about neural network diagram examples and templates, and how to use them. Just try it free now!

A neural network, also called an artificial neural network, is a subset of machine learning. It is a set of algorithms that attempts to understand the underlying relationship between a set of data, just like how the human brain operates. It seems fascinating. Think about it this way. It mimics the human brain to recognize the relationship between huge amounts of data. In that case, how powerful is the human brain? It must be doing something right if we are cloning it to make machines that do the job.

A neural network example explains the deep, expanded network between multiple data sets. It is all data science. We can predict the future with past data patterns. Neural network signals are the same as biological neurons. Neural networks often work better at predictive analytics as it contains hidden layers. I have even read somewhere that neural networks will be able to compose music in the future. What's next? World domination? Just kidding, this kind of advanced data technique helps human lives much easier. They juggle information that the human brain cannot comprehend. Yet, it all came from the human brain. 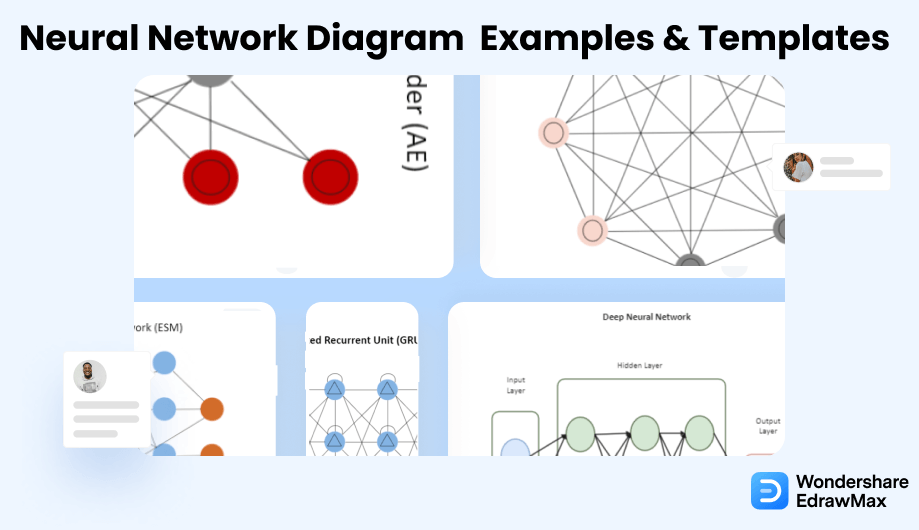 Neural networks can be easily categorized based on their depth, number of layers, the gap between input and output, and some hidden layers. These are the reasons behind linking neural networks to deep learning. The number of inputs and outputs in a neural network is the most basic criteria for analyzing its three major categories. There are several variations in the classic neural network that enables different forms of propagation of information.

A neural network example is a representation of the flow of work, and it is utilized in project management. Companies use it to manage the data on their networks and the connections between many machines in their operations. An Artificial neural network example is used to incorporate updates into a network system. Within an organization, network issues may be identified and reported with the help of this example. It is a standard practice to utilize network diagram examples for simplifying laborious and time-consuming activities, structures, and interactions.

Feed-forward neural networks are used to learn the connection between independent variables that act as network inputs and dependent variables. Dependent variables work as a network output. Deep feed forward comprises a layered system of basic neuron-like processing units. Every unit has a link with other units present in the previous link. The weights on these links represent a network's knowledge. The information goes through a function that is being evaluated from x. The intermediate calculations are necessary to determine f and the output y. These models are referred to as deep feed-forward models. 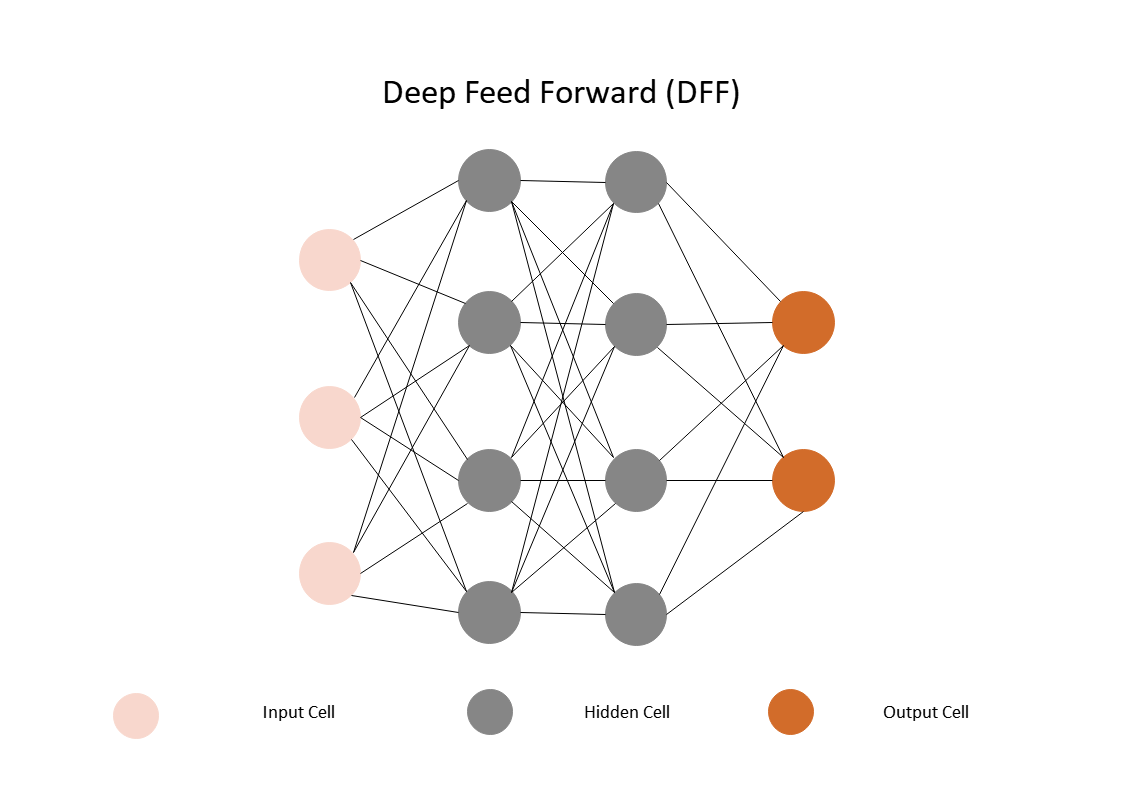 Radial basis function networks differ from other neural networks. They have a universal approximation and train quickly. The input layer, the hidden layer, and the output layer make up an RBF network, a feed-forward neural network with three layers. The RBF network is based on the cover theorem; it casts data into a higher-dimensional space using its hidden layer. Hence, the number of neurons in the hidden layers should be bigger than the number of neurons in the input layers. 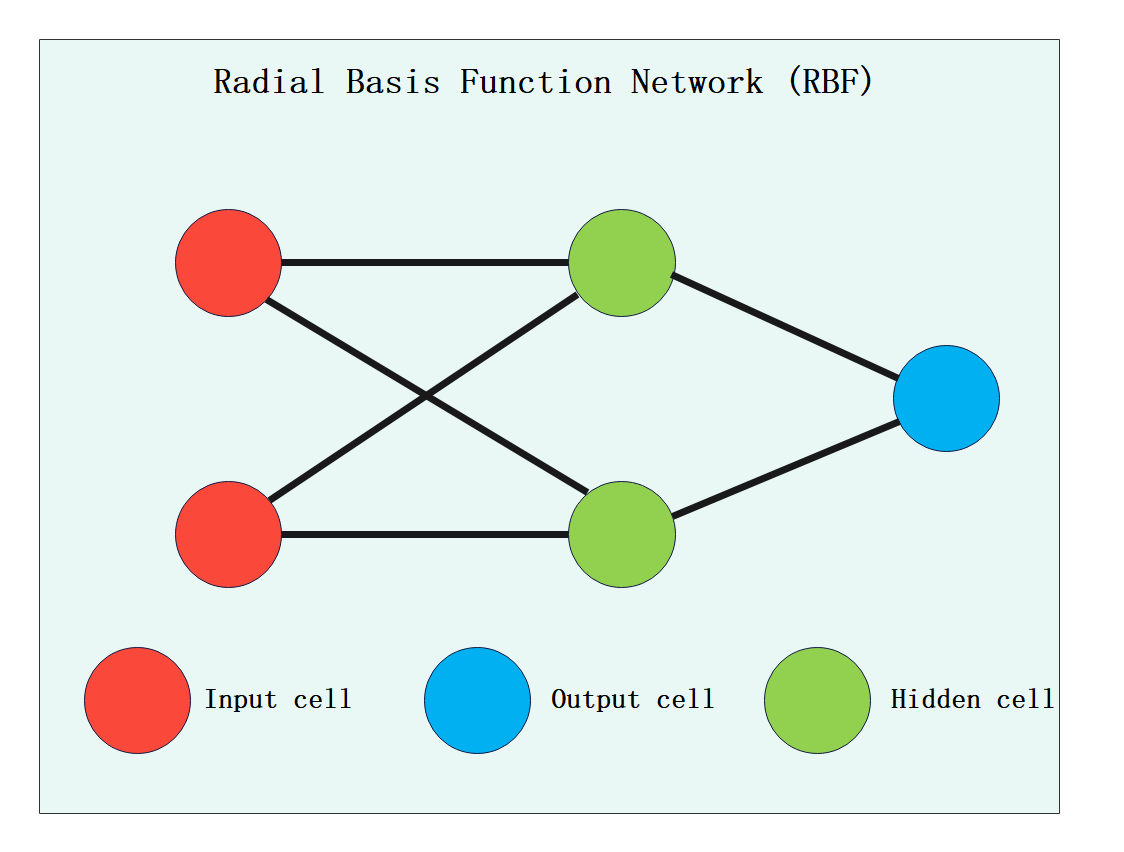 A CNN video is made up of convolutional layers and pooling layers. They together make fully connected layers. A CNN video can be made for any living being, such as a dog, person, cat, bird, fish, or fox. 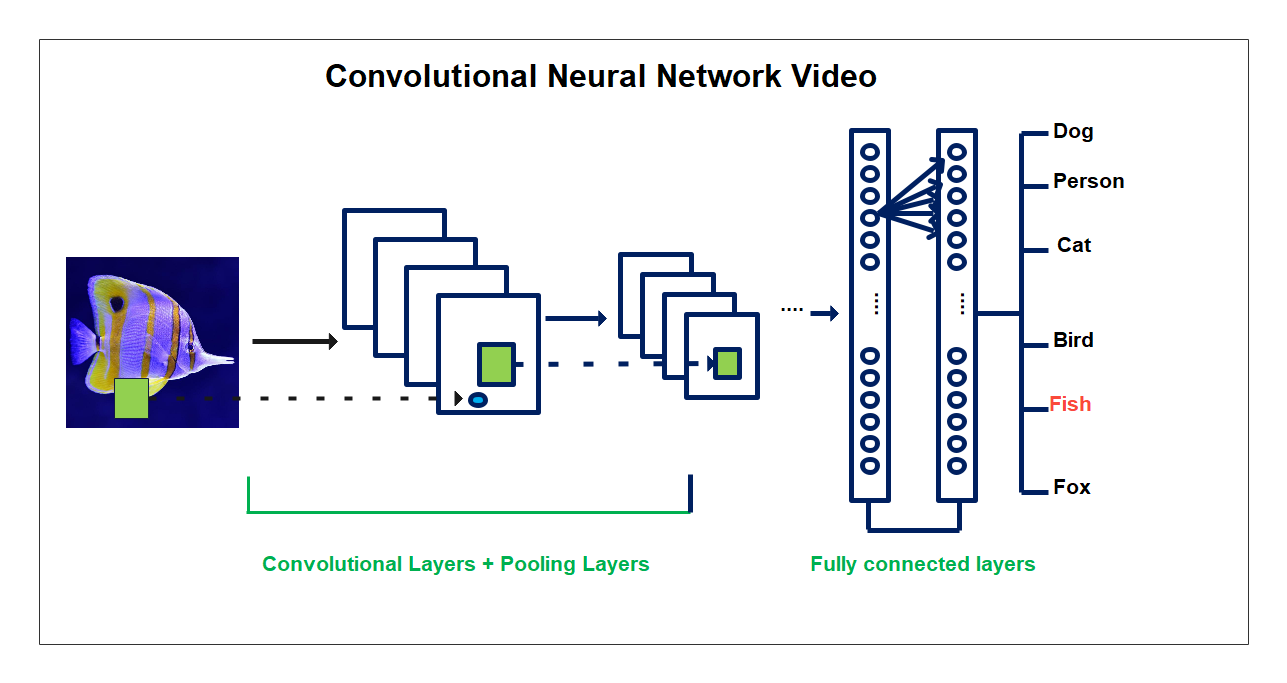 A Graph Convolutional Network (GCN) is a semi-supervised learning strategy for graph-structured data. It's built on a fast variation of convolutional neural networks that work with graphs directly. It includes input, graph, GCNN layer, pooling, hidden layers, and output. On the graph, GCNs are employed for semi-supervised learning. The GCN's primary principle is to take the weighted average of all node attributes by neighbors (including itself). The weights of lower-degree nodes are increased, and all generated vectors are then sent to neural networks for illustrations.

A convolutional neural network (CNN, or ConvNet) is a kind of artificial neural network (ANN) used to evaluate visual images in deep learning. The fundamental benefit of CNN over its predecessors is that it discovers essential traits without human intervention. For example, given a large number of photos of cats and dogs, it can learn distinguishing traits for each class on its own. In addition, CNN is computationally efficient.

LSTM networks are those kinds of RNNs that may learn order dependency in sequence prediction issues. This is needed in various complicated issue areas, including machine translation, voice recognition, and others. Deep learning's LSTMs are a complicated topic. The software uses a structure based on short-term memory processes. The unit is dubbed into a short-term memory block when building a long-term memory. These systems are often employed in natural language processing, for example. 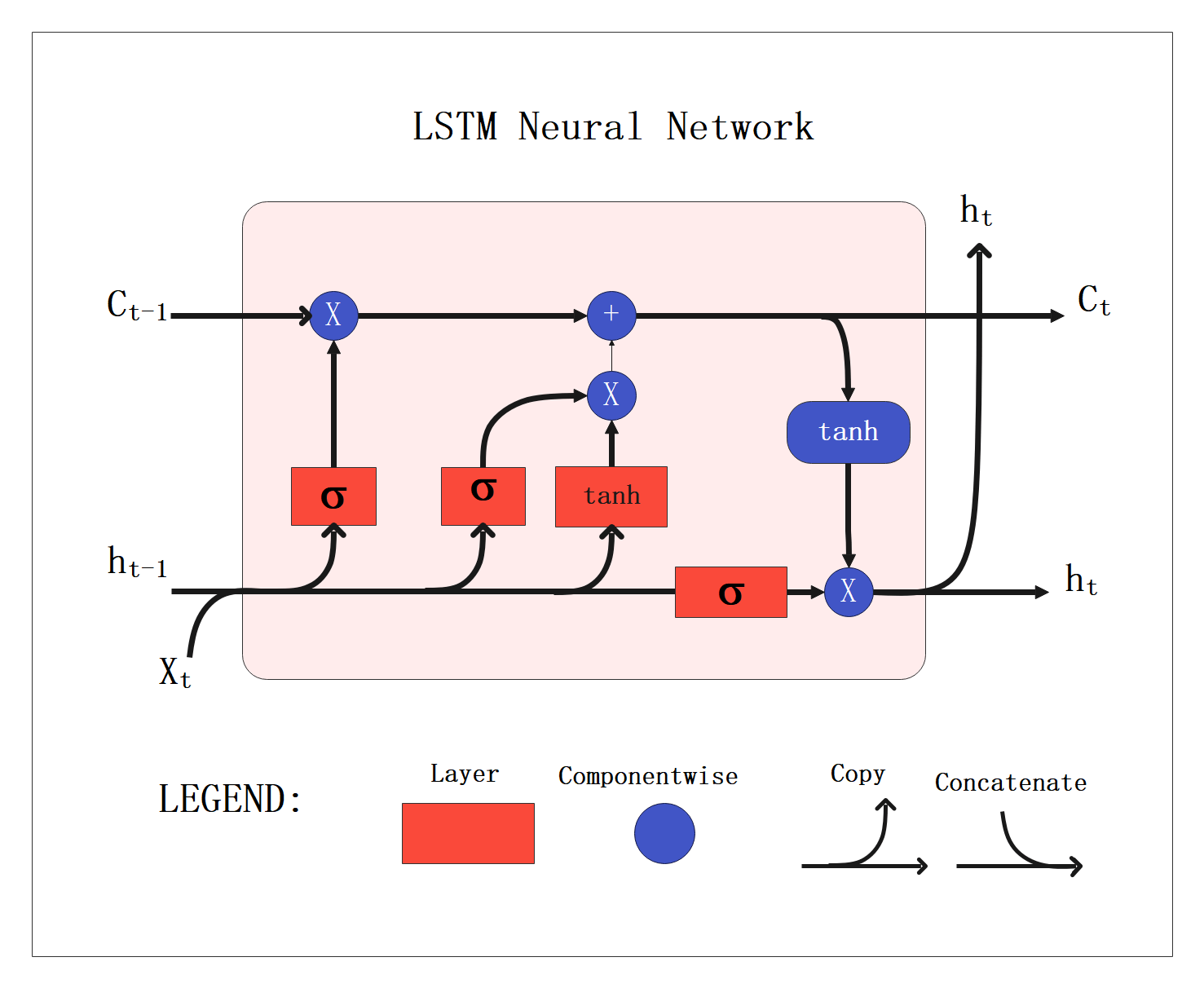 A gated recurrent unit, also known as a GRU, is a component of a specific model in a recurrent neural network. This model aims to use connections made through a series of nodes to carry out machine learning tasks associated with memory and clustering. One application of this model is in speech recognition. The main difference between a basic Recurrent Neural Network and a Gated Recurrent Unit Network is the internal working of each recurrent unit. Gated Recurrent Unit networks consist of gates that modulate the current input and the previous hidden state. When illustrated, the basic workflow of a Gated Recurrent Unit Network is comparable to that of a basic Recurrent Neural Network. 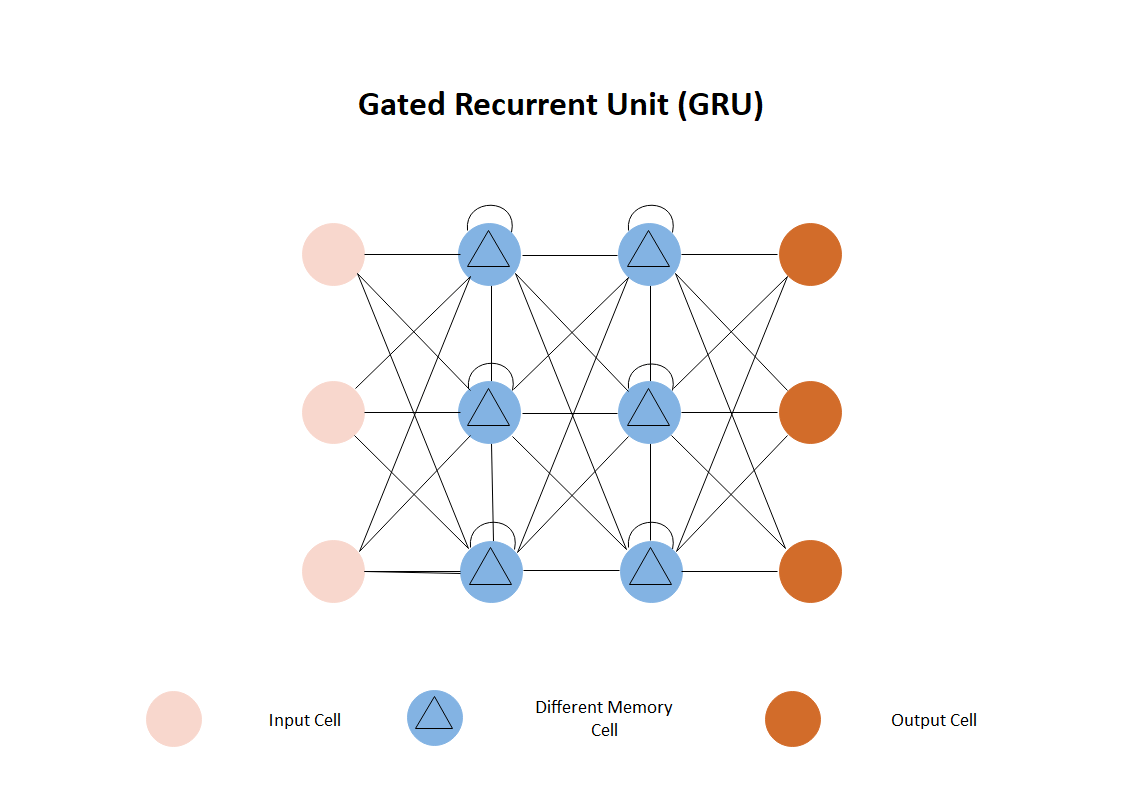 The image that was generated by the RNN neural network is a subcategory of neural networks known as recurrent neural networks or RNN. It is advantageous for the modeling of sequence data. RNNs are derived from feed-forward networks and display behavior that is analogous to human brains' operations. Put another way, and recurrent neural networks are capable of producing predicted outcomes with sequential data while other algorithms are unable to do so. RNN reduces the complexity of increasing parameters and memorizing each previous output by giving each output as input to the next hidden layer. This allows RNN to convert the independent activations into the dependent activations. This is accomplished by providing the same weights to all the layers in the network. 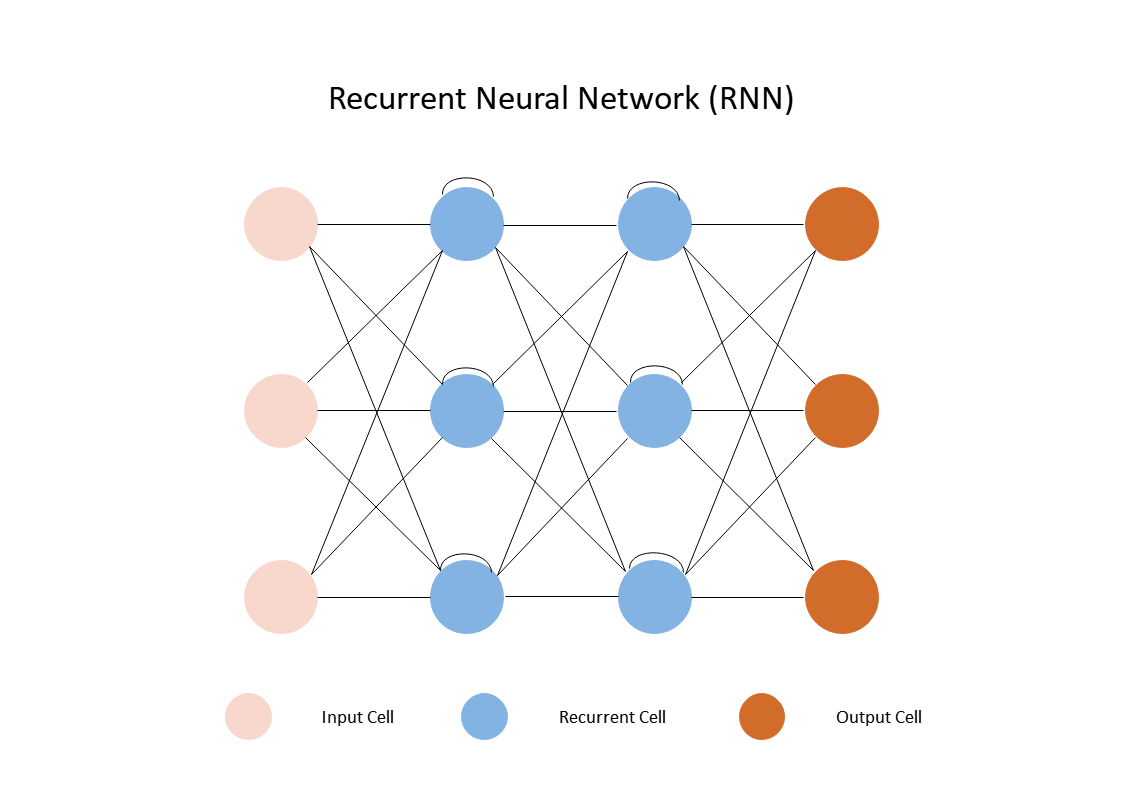 2. How to Use Neural Network Examples

EdrawMax is vector-based software that provides various templates for your neural network diagram. It provides an easily understandable interface for its users to draw efficiently and helps users edit existing templates and layouts and make their designs or template. It also provides 26000+ symbols to illustrate your neural network. There are two methods for creating a neural network by using examples: 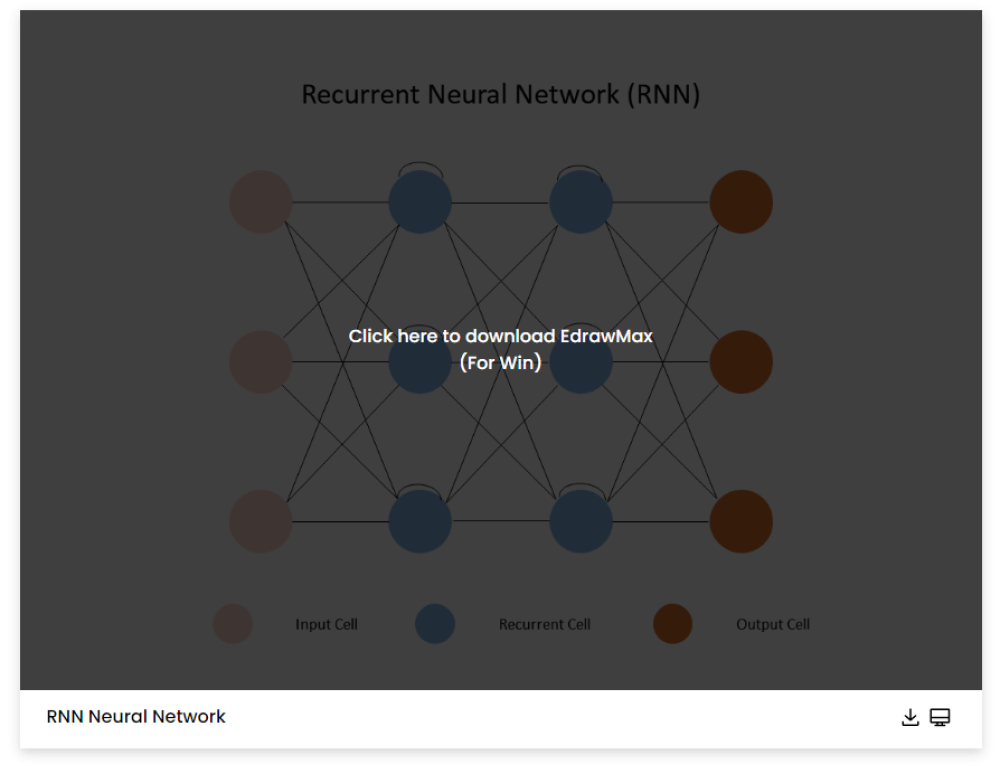 After installing EdrawMax, you can go and download the template by clicking on the bottom right corner or look for a template in the EdrawMax library without going online in desktop.

After downloading the template, you can double click to open it in EdrawMax diagramming software, or you can open EdrawMax beforehand and navigate to the template to open it. 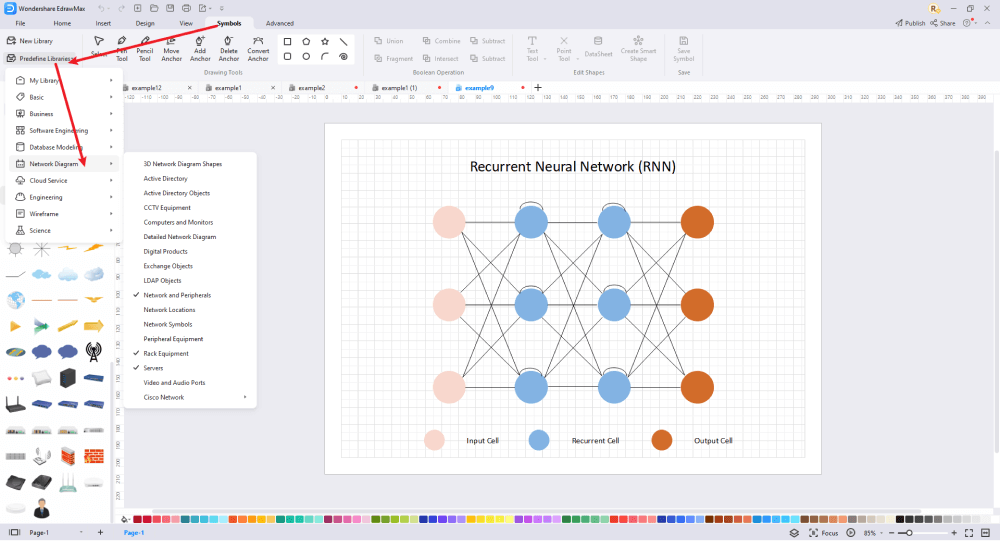 After opening it, the next step is to customize and edit the neural network example. EdrawMax gives you various unique diagramming tools that help you edit the template any way you want. You can change the color and the font liner of the template. EdrawMax features a comprehensive library with 26000+ professional symbols that you can use for free with an easy drag and drop. 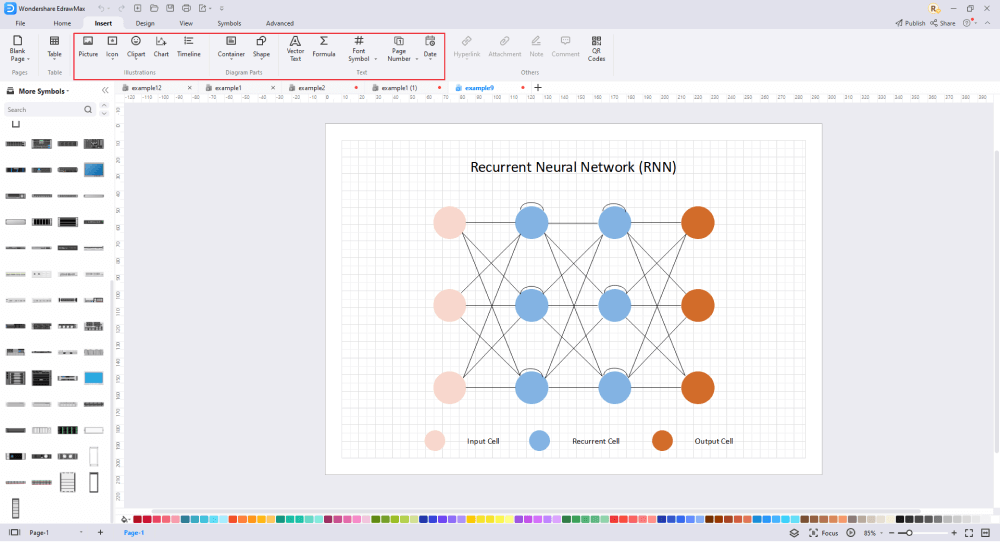 Step5 Save or Export 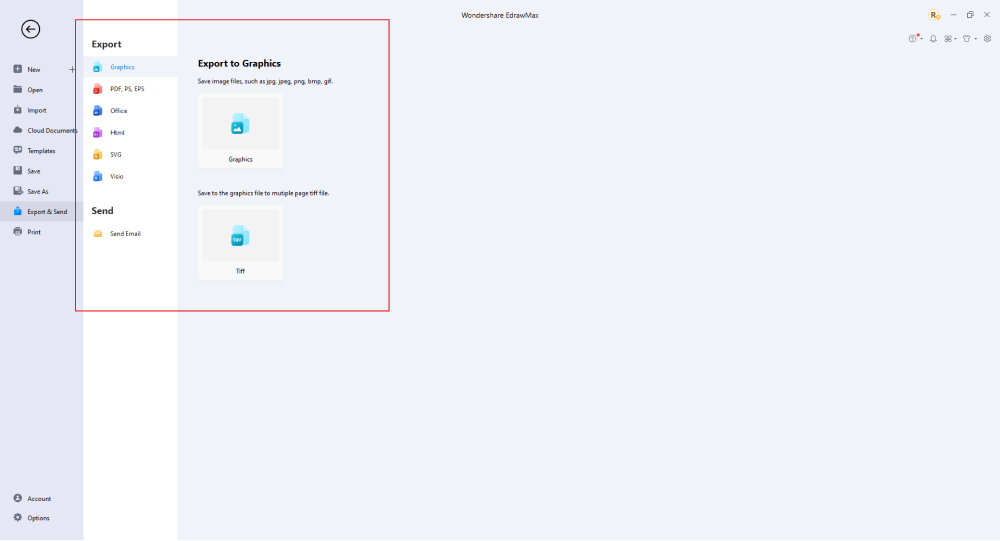 The above process was for the downloaded application. Here are the steps that you can follow to do the same thing with the online app instead. EdrawMax Online gives you free templates to select and customize and share without downloading. It also provides you with all the drawing tools in the EdrawMax software.

Just click the right bottom corner to choose 'duplicate' template online, then you can go to the online EdrawMax template community. You can head to the neural network diagram page, and learn more or use directly. 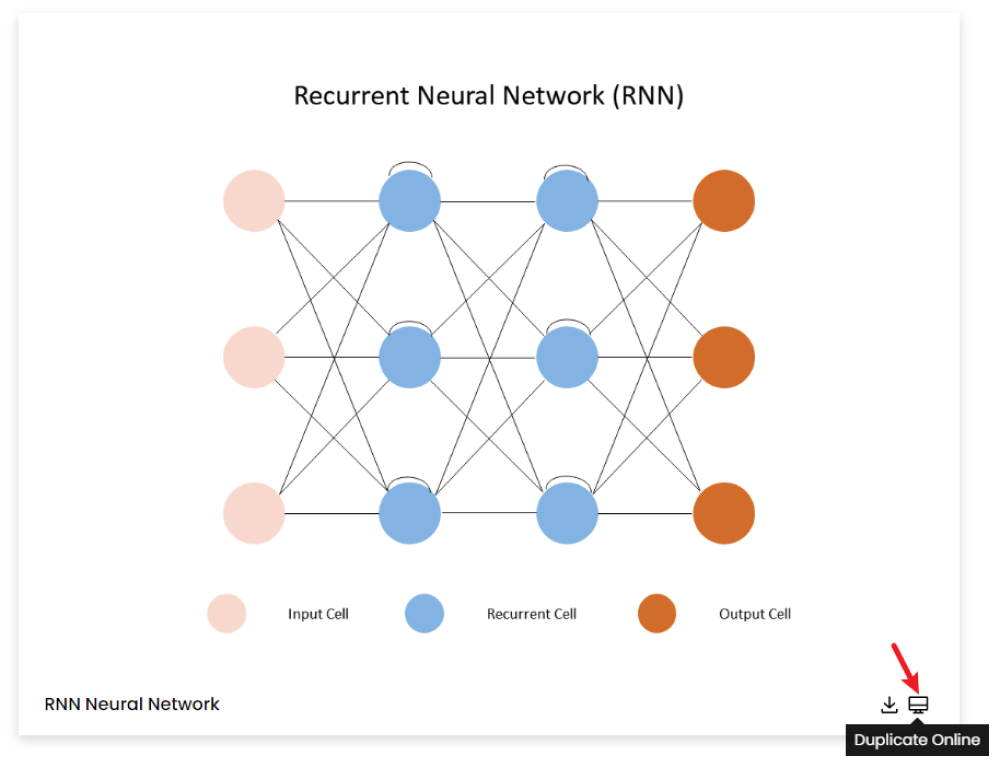 To search for more templates, go to the EdrawMax template community and search for the template you want. You can scroll down or search with the full name of the neural network template to get it quickly. 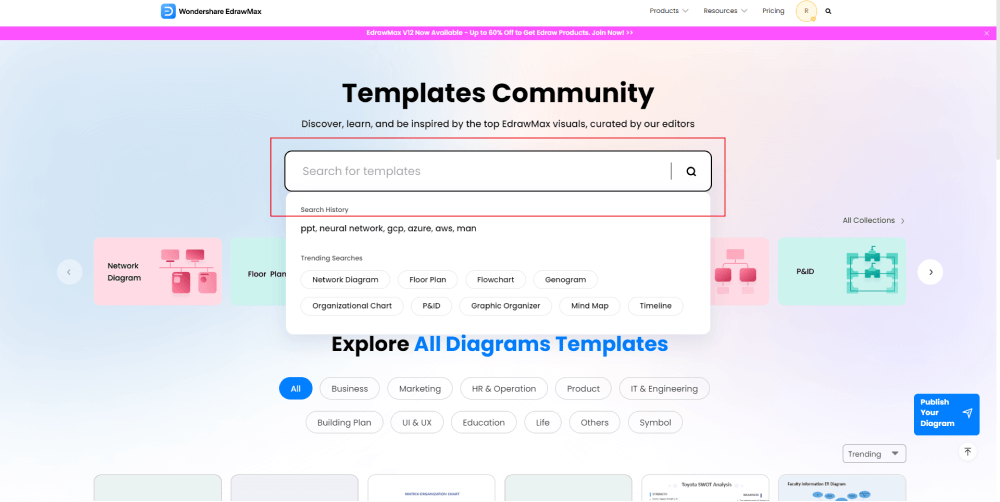 Open the template you want to customize and click on the 'duplicate' option. After clicking, the template will open with EdrawMax Online.

Customize and edit the neural network example after clicking on the duplicate option and getting the drawing canvas with the template you selected. EdrawMax features unique diagramming tools that help you customize the template and make whatever changes you want. You can change the color and the font liner of the template. EdrawMax also features a comprehensive library with 26000+ professional symbols that you can use for free with an easy drag and drop. 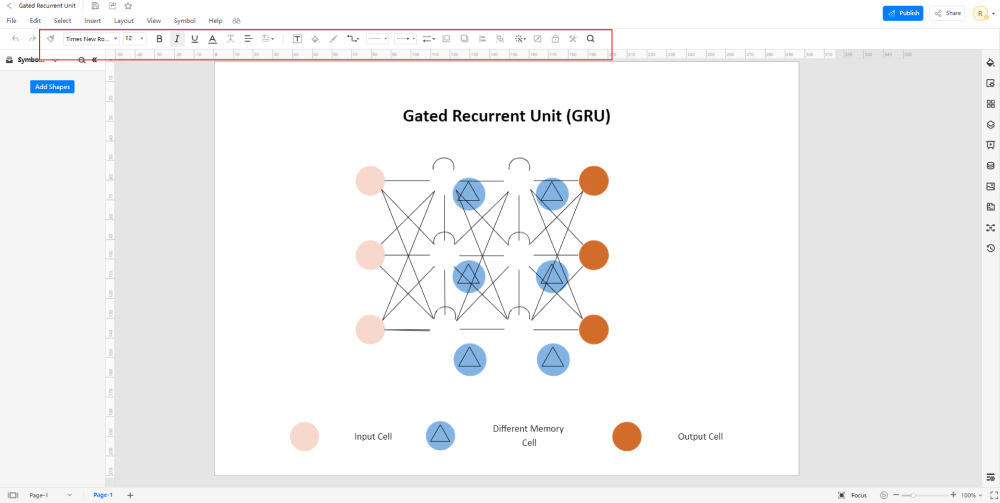 Step5 Save or export

After your neural network is complete, the next step is to save or export your drawing. EdrawMax gives you the same features as the EdrawMax diagramming software. It also supports multiple document formats so that you can export your drawing in any format. You can save and share your document in pdf, graphics, HTML, Visio, Microsoft Excel, and other popular formats. Click on the 'file' menu and go to 'export'. Click the format you want and enter. EdrawMax features a presentation mode and allows you to share your drawing on social media. Or you can "Publish" your neural network diagram in the template community. 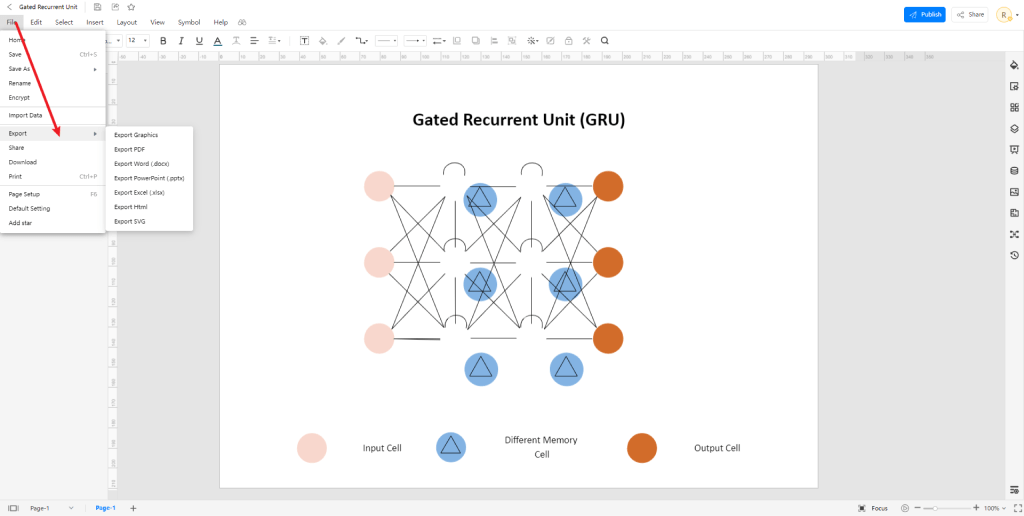 In contrast to other drawing applications, EdrawMax has all of the features and libraries that are not found in several other drawing programs. As a result, EdrawMax has more possibilities for corporate presentations and is more cost-effective than the desktop version. Compared to other sites and applications, EdrawMax is the best neural network diagram generator with various templates, diagrams, graphics, colors, and symbols. Anyone can access it for creating a neural network diagram, filers, posters, maps, network designs, PPT, and visual reports. Here are some key features of the EdrawMax application that will make you believe in it completely:

It is a standard practice to utilize network diagrams to simplify laborious and time-consuming activities, structures, and interactions. The steps to make neural network diagrams are very simple. Develop a diagram of that network and modify the neural network according to your needs. If you have finished the neural network, you will be able to save it so you can access it later and share it whenever needed. EdrawMax Online allows you to export documents in various widely used file formats, including Excel, PDF, Graphics, PowerPoint, or Word.

EdrawMax is the best neural network diagram generator with its hundreds of free templates and creative drawing tools that helps you customize templates and create a diagram in minutes. EdrawMax supports multiple documents formats and is the first choice of professionals for its fast drawing, data automation, and symbol import features. 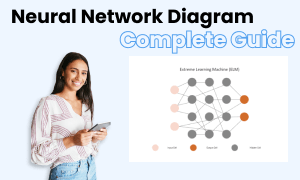