To meet a customer's business and technical goals for a corporate network design, you might need to recommend a network topology consisting of many interrelated components. This task is made easier if you can "divide and conquer" the job and develop the design in layers.
Network design experts have developed the hierarchical network design model to help you develop a topology in discrete layers. Each layer can be focused on specific functions, allowing you to choose the right systems and features for the layer. For example, high-speed WAN routers can carry traffic across the enterprise WAN backbone, medium-speed routers can connect buildings at each campus, and switches can connect user devices and servers within buildings.

A typical hierarchical topology is

Why Use a Hierarchical Network Design Model

Networks that grow unheeded without any plan in place tend to develop in an unstructured format. Dr. Peter Welcher, the author of network design and technology articles for Cisco World and other publications, refers to unplanned networks as fur-ball network.

Welcher explains the disadvantages of a fur-ball topology by pointing out the problems that too many CPU adjacencies cause. When network devices communicate with many other devices, the workload required of the CPUs on the devices can be burdensome. For example, in a large flat (switched) network, broadcast packets are burdensome. A broadcast packet interrupts the CPU on each device within the broadcast domain, and demands processing time on every device for which a protocol understanding for that broadcast is installed. This includes routers, workstations, and servers.

Another potential problem with nonhierarchical networks, besides broadcast packets, is the CPU workload required for routers to communicate with many other routers and process numerous route advertisements. A hierarchical network design methodology lets you design a modular topology that limits the number of communicating routers.

Using a hierarchical model can help you minimize costs. You can purchase the appropriate internetworking devices for each layer of the hierarchy, thus avoiding spending money on unnecessary features for a layer. Also, the modular nature of the hierarchical design model enables accurate capacity planning within each layer of the hierarchy, thus reducing wasted bandwidth. Network management responsibility and network management systems can be distributed to the different layers of a modular network architecture to control management costs.

Modularity lets you keep each design element simple and easy to understand. Simplicity minimizes the need for extensive training for network operations personnel and expedites the implementation of a design. Testing a network design is made easy because there is clear functionality at each layer. Fault isolation is improved because network technicians can easily recognize the transition points in the network to help them isolate possible failure points.

Hierarchical design facilitates changes. As elements in a network require change, the cost of making an upgrade is contained to a small subset of the overall network. In large flat or meshed network architectures, changes tend to impact a large number of systems. Replacing one device can affect numerous networks because of the complex interconnections.

How Can You Tell When You Have a Good Design

Here are some wise answers from Peter Welcher that are based on the tenets of hierarchical, modular network design:

When scalability is a major goal, a hierarchical topology is recommended because modularity in a design enables creating design elements that can be replicated as the network grows. Because each instance of a module is consistent, expansion is easy to plan and implement. For example, planning a campus network for a new site might simply be a matter of replicating an existing campus network design.

A wide-area network (WAN) for a small company can consist of a few sites connected in a loop. Each site has a WAN router that connects to two other adjacent sites via point-to-point links. As long as the WAN is small (a few sites), routing protocols can converge quickly, and communication with any other site can recover when a link fails. (As long as only one link fails, communication recovers. When more than one link fails, some sites are isolated from others.)

A flat loop topology is generally not recommended for networks with many sites, however. A loop topology can mean that there are many hops between routers on opposite sides of the loop, resulting in significant delay and a higher probability of failure. If your analysis of traffic flow indicates that routers on opposite sides of a loop topology exchange a lot of traffic, you should recommend a hierarchical topology instead of a loop. To avoid any single point of failure, redundant routers or switches can be placed at upper layers of the hierarchy.

In the early and mid-1990s, a typical design for a LAN was PCs and servers attached to one or more hubs in a flat topology. The PCs and servers implemented a media-access control process, such as token passing or carrier sense multiple access with collision detection (CSMA/CD) to control access to the shared bandwidth. The devices were all part of the same bandwidth domain and had the ability to negatively affect delay and throughput for other devices.

These days, network designers usually recommend attaching the PCs and servers to data link layer (Layer 2) switches instead of hubs. In this case, the network is segmented into small bandwidth domains so that a limited number of devices compete for bandwidth at any one time. (However, the devices do compete for service by the switching hardware and software, so it is important to understand the performance characteristics of candidate switches.

Although the model was developed at a time when routers delineated layers, the model can be used for switched networks as well as routed networks. 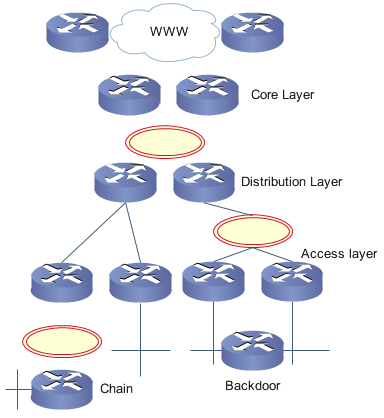 This section briefly describes some guidelines for hierarchical network design. Following these simple guidelines will help you design networks that take advantage of the benefits of hierarchical design.
The first guideline is that you should control the diameter of a hierarchical enterprise network topology. In most cases, three major layers are sufficient: