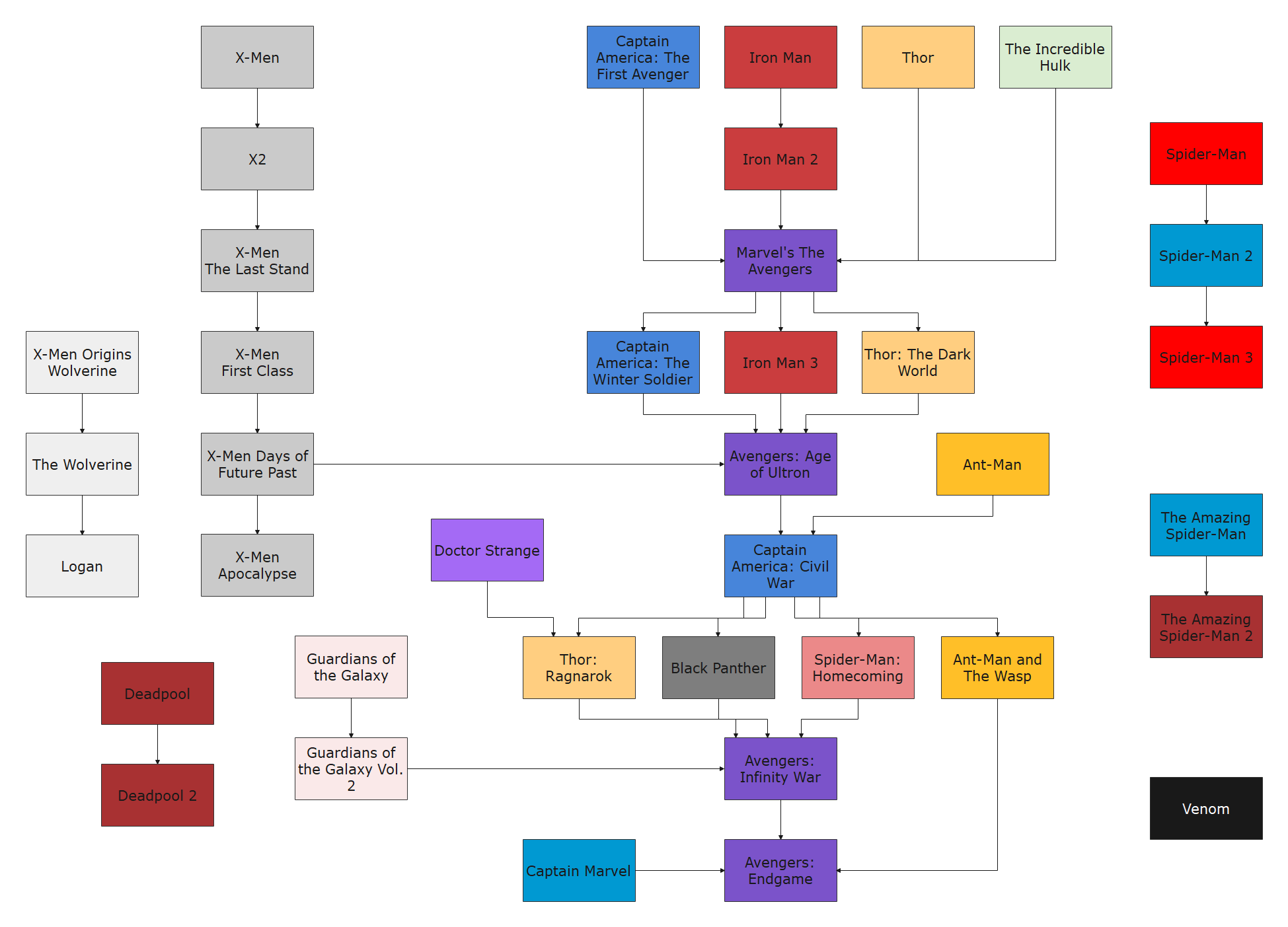 It’s safe to say that the Marvel Cinematic Universe (MCU) has taken the entertainment world by storm. The movie franchise, which as of 2020 spans over a series of three phases and 23 films, tells the story of the Infinity Saga, and involves the crossing over of numerous characters, settings, and plot points.

So what makes Marvel movies so popular?

There are so many movies in the MCU. One commonly discussed topic is the order in which one should enjoy the Marvel movies: by release order, or based on the overarching story’s chronological order.

Here are some reasons why you should go with one instead of the other.

Watching Marvel movies in the order of timeline development is more conducive to understanding the story development of the Marvel movie world. Although this method is more difficult than watching movies according to the release time, there are also some merits to understand of the plot and have better subjective experience. If you want to know more about Marvel chronological order, you can see the flowchart below.

Watching the Marvel movies in release order has long been considered an easy way for MCU novices to enjoy the movies, without having to worry about the overarching story. As mentioned, there are 23 movies in the first three phases of Marvel’s MCU. The storylines and timelines may get muddled, so we have created several Marvel movie flowcharts at the end to guide you through the series.

In the meantime, here is a summary of each Marvel movie (WARNING: SPOILERS AHEAD!).

The movie that kick-started an entire universe. Iron Man introduces us to the eccentric, multi-billionaire Tony Stark. Throughout the course of the roughly 2-hour movie, we watch Tony transform piece by piece into the beloved armored superhero, Iron Man. Most significantly of all, we witness him mature from a self-centered, egotistical person into one who uses his technology for the good of mankind.

The Incredible Hulk introduces Bruce Banner, aka the Hulk, to the MCU. After being subjected to gamma radiation, Banner transforms into the huge green monster every time he experiences negative emotions, such as extreme stress and anger. In The Incredible Hulk, Banner is on the run from the military, who are seeking to capture him in order to reinvigorate the “Super-Soldier” program.

This movie takes a deeper look at Tony Stark’s personal life, with his relationship with father explored further. Stark is also faced with questions over the ownership of his technology, and struggles to ensure that it doesn’t fall into the wrong hands. The main antagonist, Ivan Vanko, seeks to use Stark’s technology against him, fueled by a hatred and personal vendetta against the Starks.

Thor introduces us to the God of Thunder. It tells the story of how Thor was stripped of his powers due to his arrogance and pride in reigniting a war, and how he must prove himself worthy again of his powers. In the meantime, his brother Loki plots a takeover of the throne of Asgard, their home planet. Other notable introductions into the MCU include Odin, Frigga, Heimdall, Sif, the Warriors Three, Jane FOster, Darcy Lewis, Erik Selvig, and Clint Barton (Hawkeye).

Taking place toward the end of World War II, Captain America: The First Avenger tells the story of Steve Rogers. Transformed from a frail, sickly man into the titular superhero via a specially created super-serum, Captain America foils the Red Skull from using the power of the Tessaract to take over the world. Captain America’s sacrifice leads to him being frozen in ice for decades, only to be pulled out and reawakened in the modern day.

The movie introduces audiences to the first of the Infinity Stones - the Tessaract (The Space Stone) - which is a key element in the overarching Infinity Saga storyline. Notable characters such as Bucky Barnes, Peggy Carter, Howard Stark and Arnim Zola are introduced in this movie, who will go on to greatly impact the future of the MCU.

The movie that brought Marvel’s ensemble of characters together. Loki, armed with the Tessaract, travels to earth in an attempt to enslave it. In response, S.H.I.E.L.D director Nick Fury enlists the help of Iron Man, Captain America, Thor, The Incredible Hulk, Black Widow, and Hawkeye to put an end to Loki’s plans. This movie marks the end of Phase One of the MCU.

Iron Man 3 is a more personal, introspective exploration of the man behind the armour. It follows Tony Stark right after the events of The Avengers; he is suffering from PTSD after the Battle of New York. His obsession with creating more armoured suits causes a rift in his relationship with Pepper Potts. After Stark’s latest nemesis, the Mandarin, destroys his armoured suits, he must rely on his wit and ingenuity to stop the Mandarin from terrorizing the United States.

When Jane Foster accidentally stumbles across the Aether - an ancient weapon used by the Dark Elves in a battle against the Asgardians many years ago - Thor must bring her to Asgard to protect her against the Dark Elf Malekith, who seeks to use the Aether to destroy the Nine Realms. Thor: The Dark World is another movie that introduces an Infinity Stone: the Aether (the Reality Stone).

Following the events of The Avengers, Captain America struggles with readjusting to life in the modern day. After an attack on S.H.I.E.L.D director Nick Fury’s life, Captain America, alongside Black Widow and the newly introduced Falcon discovers that the real enemy has been hiding in plain sight all along.

Space adventurer Peter Quill is in possession of a mysterious orb that is also wanted by Ronan the Accuser. To evade capture, Quill forms an unlikely alliance with fellow outcasts Rocket Racoon, the lovable talking tree Groot, assassin Gamora, and Drax the Destroyer. Little do they know, however, that the orb contains more power than any of them realise.

Guardians of the Galaxy introduces the third Infinity Stone: the Power Stone.

When Tony Stark accidentally creates and unleashes a rogue artificial intelligence program that is hell-bent on destroying the world, he and the rest of the Avengers must team up once again to prevent human extinction.

Scarlet Witch and Vision are new, notable characters introduced in Avengers: Age of Ultron. Additionally, Mind Stone and Space Stone are introduced for the first time - the fourth and fifth Infinity Stone to date.

When Hank Pym is forced out of his own company, and his shrinking technology falls into the hands of his evil protege Darren Cross, he and his daughter Hope enlist the help of petty crook Scott Lang. Armed with a suit that enables Lang to shrink in size, the three-stage a heist to prevent Cross from wreaking havoc.

When an Avengers mission leads to massive collateral damage, the members of the team are caught in the middle of a political storm. They are forced to pick sides: Stark’s, who believes that laws are needed to keep the Avengers in check, or Rogers’, who disagrees and maintains that they are better off without government intervention. Meanwhile, a terrorist named Helmut Zemo seeks to destroy the Avengers following the death of his family during the events of Avengers: Age of Ultron.

A car accident leaves brilliant brain surgeon Dr. Stephen Strange unable to use his hands. In an attempt to heal himself, he journeys to Kathmandu, where he meets the Ancient One, a powerful sorceress skilled in the mystic arts. There, Strange learns the ways of the mystic arts. He must use his newfound abilities to protect the world from threats beyond reality. The sixth and final Infinity Stone is revealed in the film: the Time Stone.

Family is at the heart of Guardians of the Galaxy Vol. 2. The beloved ragtag team meets Ego, Peter Quill’s father. However, it is soon apparent that Ego is much more sinister than first thought.

Following the events of Captain America: Civil War, Peter Parker is back home in New York, trying to embrace his role as the friendly neighbourhood Spider-Man. However, deep down the teenage superhero yearns for more. His physical and mental resilience are put to the test when the Vulture threatens those that he loves the most. The movie introduces Peter’s aunt May Parker, love interest M.J., and best friend Ned Leeds.

Thor’s sister, Hela, returns to wreak havoc on Asgard. Meanwhile, the god of thunder and Loki are forced into a distant planet. Together, along with Hulk, they must work their way back to Asgard and stop Hela from destroying their home planet. hor: Ragnarok Tfills the audience in on what happened to Hulk after the events of Avengers: Age of Ultron. New characters including Valkyrie, Korg and Meik are introduced.

After the death of his father, King T’Chaka, in Captain America: Civil War, T’Challa returns to his home country of Wakanda to assume the throne as king. However, when his cousin, Erik Stevens (Killmonger) appears to challenge him for the throne, T’Challa is forced to reflect on the mistakes of his forefathers, and harness the power of the Black Panther to protect his people. Character introductions are given to T’Challa’s sister Shuri, Wakandan general Okoye, and foe-turned-ally M’Baku.

Avengers: Infinity War focuses on The Mad Titan Thanos’ quest to collect the six Infinity Stones. Thanos plans to use the Infinity Stones to wipe out half of all living beings. In an epic showdown that forces the audience to grapple with the morality of the individual versus the greater good, all of the Avengers we have watched grace the big screen must come together to stop Thanos before his twisted plans become reality.

Set just before the events of Avengers: Infinity War, Ant-Man and the Wasp focuses on Scott Lang, Hank Pym, and Hope van Dyne’s efforts to rescue Janet van Dyne from the Quantum Realm. Audiences get to see Hope van Dyne as The Wasp for the first time.

Kree warrior Carol Danvers is separated from her intergalactic team and is stranded on earth. While on earth, she forms an unlikely partnership with S.H.I.E.L.D. agent Nick Fury. Together, they uncover dark truths about her past and her extraordinary powers, all in the midst of a war between the Kree and the Skrulls.

During the post-credits scene, Carol finds the Avengers, after Nick Fury activated a distress signal just before being snapped away himself. It is here that the events of the following movie pick up.

In an effort to reverse the devastating impact of Thanos’ snap at the end of Avengers: Infinity War, the remaining heroes must travel back in time to gather the six Infinity Stones and stop Thanos’ plans from ever happening in the first place. In a story of great tragedy and triumph, the Avengers make one final stand to bring everyone back.

Peter Parker - and the rest of the world - are struggling to come to terms with the loss of Tony Stark. When Nick Fury approaches him with a mission in the middle of his school trip, Spider-Man must face off against four giant elemental creatures causing chaos around the world - as well as Mysterio, the mastermind behind the destruction. 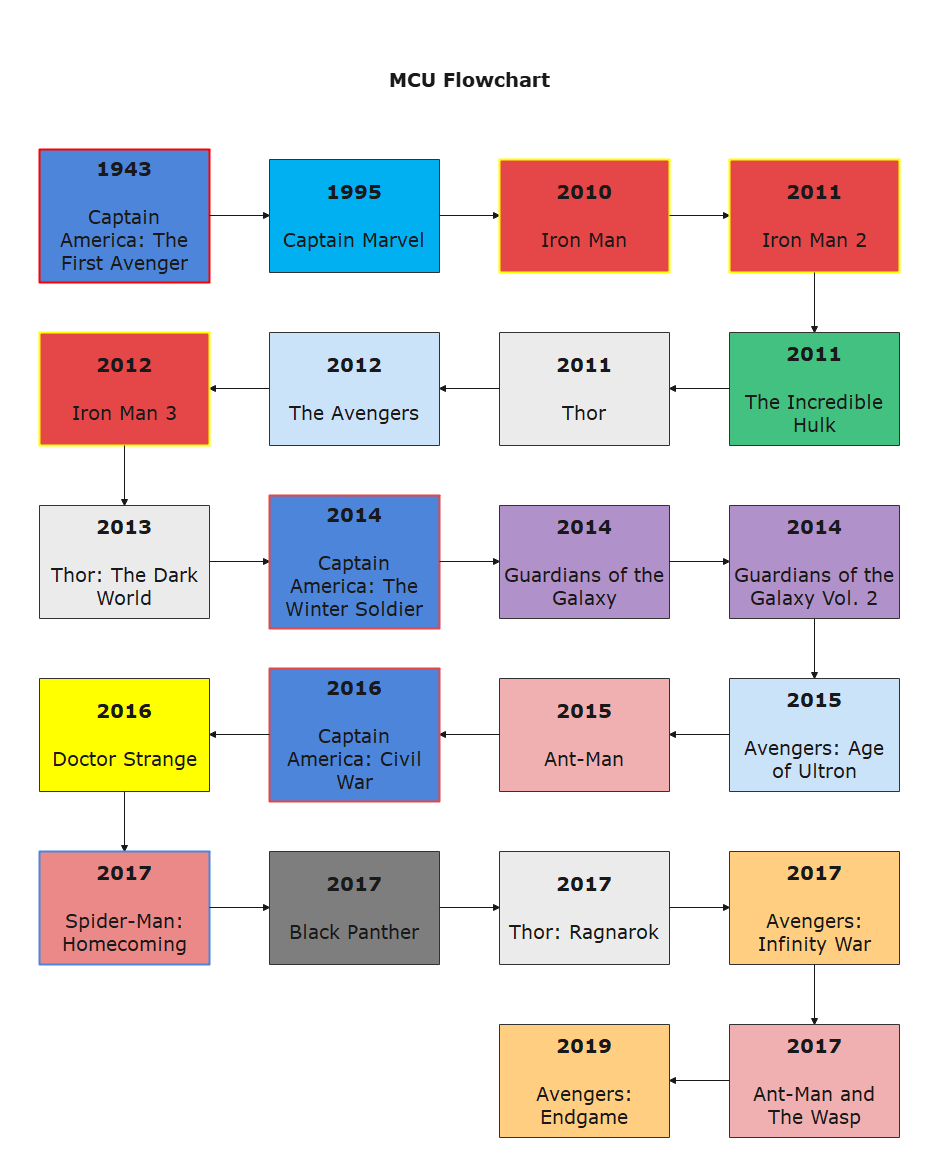 Marvel achieved an enormous feat by tying in so many stories and characters into one huge, cohesive, and epic storyline. Our Marvel movie flowcharts show just how impressive this accomplishment really is. But they haven’t stopped there. Marvel is now in Phase Four of their MCU. With a whole host of movies and TV shows slated for release in the coming months and years, Marvel is well on their way to solidifying the MCU as an entertainment empire.