Posted by James Freeman | 06/25/2021
Learning the basic genogram symbols is the primary requirement to create a professional and easy-to-understand genogram.

This article introduces part of the basic genogram symbols from different angels with pictures and hope it enable you to know more about genograms. 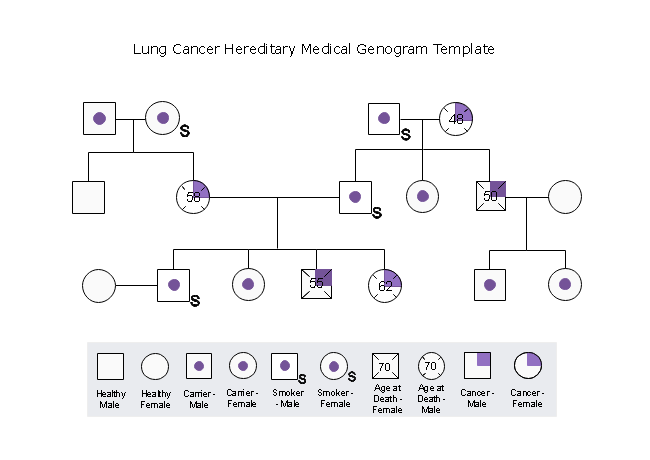 There are three types of children: biological/natural child, adopted child, foster child and they are showed differently in a standard genogram as the following pictures shows. A triangle has three meanings: a pregnancy, a miscarriage and an abortion. But there is a a diagonal cross drawn on the top of the triangle to indicate death, in other words, miscarriage. Abortions have one more additional horizontal line based on the miscarriage. A still birth is still represented by the gender symbols while with a diagonal cross drawn and twice smaller than them.

Sometimes there are also multiple births and the child links are joined together to show them such as twins, triplets, quadruplets, quintuplets, sextuplets and more. Identical twins are displayed by an horizontal line between siblings. It will be easier to understand the symbols with below example.

An horizontal line connects the male and female means they are marriage relationship.

If they are divorced successfully, then there will be two slashes towards the left. A diagonal cross on the horizontal line represents one of spouse is died after married.

There are also many emotional symbols to describe the emotional bond between two individuals. This part will introduce these symbols from very close to cutoff.

If these two individuals are connected by two green straight line, it means they are very close to each other and have no secrets between them.

Two dash lines between two individuals means they are friends and share secrets with each other.

If there is just a grey line, then they are just a plain normal relationship.

Define a distant relationship in a genogram is using one dash line between two individuals. If there are two extra short main string, then it means they have no contact at all.

If they are connected by a dash line, which is similar with a series of ellipsis, then they are indifferent to each other.

Download all of the Symbols from Free Genogram Maker

What is the Definition of Genogram?

How to Create a Genogram Quickly