Posted by James Freeman | 02/15/2022
Learn more about Traditional Chinese Medicine through visual diagrams. Create vector graphs with automatic diagramming software which will save you both time and effort.

Diagram 1 the Theory of Five Elements

A vivid vector circular diagram helps you understand the theory of Five Elements easily. The theory of five elements - wood, fire, earth, metal and water - was an ancient philosophical concept used to explain the composition and phenomena of the physical universe. In traditional Chinese medicine, the theory of five elements is used to interpret the relationship between the physiology and pathology of the human body and the natural environment. The theory believes that the five elements are in constant movement and change, and the interdependence and mutual restraint among them explain the complicated connection between material objects as well as the unity between the human body and the natural world.

According to traditional Chinese medicine, the visceral organs, as well as other organs and tissues, have similar properties to the five elements; they interact physiologically and pathologically just like the five elements. Based on the features, forms, and functions of different phenomena, the complex links between physiology and pathology as well as the interconnection between the human body and the natural world are explained. 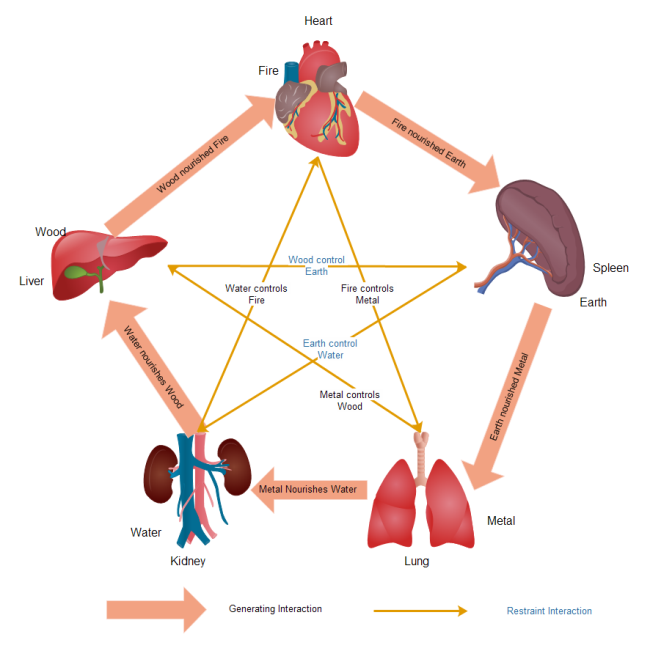 Traditional Chinese medical theory believes that each of the Five Elements corresponds to a specific organ as well as a specific emotion. The emotions are not believed to always be the direct cause of an ailment, but have an undeniable link with the progress and condition of the problem.

The five yin-organs - heart, liver, spleen, lung and kidney - produce five kinds of essential Qi(life force). The Qi bring forth joy, anger, grief, worry, and fear. According to the Five-Element theory, anger is associated with Wood; joy is connected with Fire, pensiveness with Earth, grief with Metal, and fear with Water. The liver is associated with Wood and therefore with anger, the heart with Fire and joy, the spleen with Earth and pensiveness, the lung with Metal, and grief and the kidney with Water and fear. Such explanation is a little bit confusing. To make it more understandable, the following circular diagram is presented. With each organ visualized, you can understand such relationship more easily. 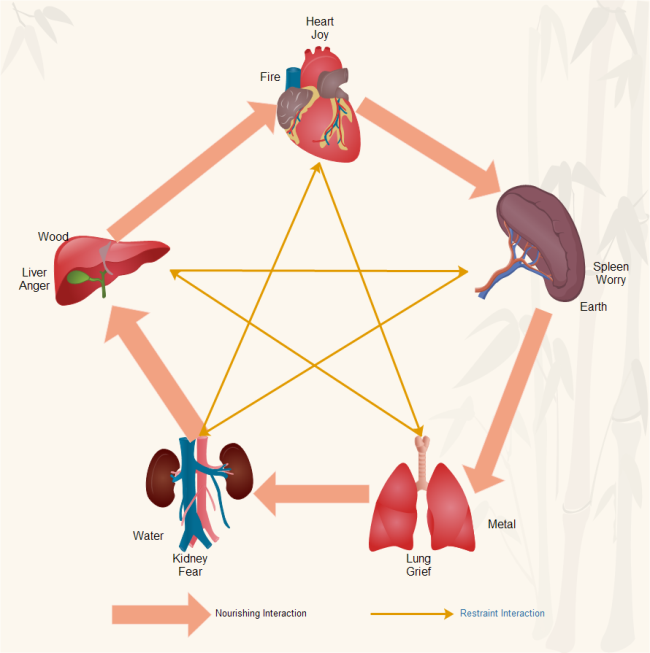 Edraw is an easy diagram maker with simplicity, convenience and rich features. It facilitates conversion of ideas, designs and products into visual and vivid images, and is able to assist us in producing infographics and attractive icon drawings and models to clean the files and make them readable and apprehensible. Your job can be done in a funnier and more efficient way.

A Shortcut to Create Circular Diagram