Offers many useful inductor symbols, such as 3D stact top, 3D stack middle, range label, data block, data chunk, etc. All these shapes will greatly help you when you draw the inductor diagrams.

The picture below is the inductor shapes in our symbols library, such as position indicator, position transmitter inductor, magnetic-core inductor, mutual inductor, half inductor, etc. Read electrical symbols introduction to get more information. 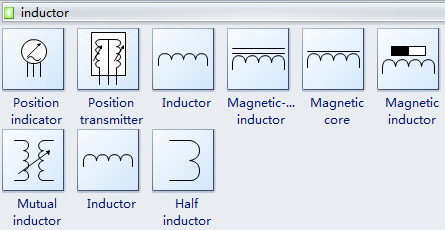 Inductor is a component in an electric or electronic circuit which possesses inductance.

Click the floating button around the inductor shapes, just as the picture above shows to set their property.

Need fresh looking inductor symbols for your design? These inductor symbols are a cinch to pop in. And their crisp, fine detail will make spectacular, easy-to-understand diagrams and presentations to your customers.

How to draw electrical engineering diagram

How to Create Basic Electrical Diagram