Go Paperless to Save Earth - Up to 60% Off to Get Edraw Products. Join Now! >>
edraw-max-horizontal
Product Tour
Templates
Guide
What's New
Download
Start Now
For Windows For Mac For Linux 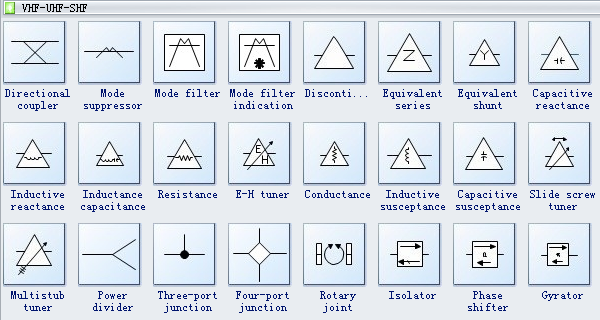 Directional coupler is a 4-port network that is designed to divide and distribute power.

Resistance is the opposition that a substance offers to the flow of electric current. It is represented by the uppercase letter R.

Power dividers are used in a wide variety of applications and can satisfy almost any requirement where a signal needs to be distributed or combined.

Maser is a device using the stimulated emission of radiation by excited atoms to amplify or generate coherent monochromatic electromagnetic radiation in the microwave range.

Laser is a device that emits light through a process of optical amplification based on the stimulated emission of electromagnetic radiation.

Inductor is a component in an electric or electronic circuit which possesses inductance.

Choke in electronics is an inductor used to block higher-frequency alternating current.

Variometer is an inductor whose total inductance can be varied by altering the relative position of two coaxial coils connected in series, or by permeability tuning, and so usable to tune an electric circuit. 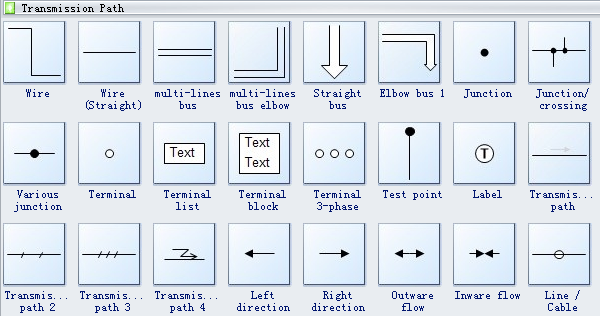 Wire is a metal drawn out into the form of a thin flexible thread or rod.

Junction is a point where two or more things are joined.

Terminal is a point of connection for closing an electric circuit.

Terminal block is a device that joins wires or cables. Terminal blocks typically snap into a metal rail or are screw mounted on the panel of a control enclosure.

Test point is a location within an electronic circuit that is used to either monitor the state of the circuitry or to inject test signals.

More symbols can be found here: