Back to school, back on track! - Up to 70% Off and Best Price Guarantee. Check >>
edraw-max-horizontal
Product Tour
Templates
Guide
What's New
Download
Start Now
For Windows For Mac For Linux

Mesh network topology is one of the key network architectures in which devices are connected with many redundant interconnections between network nodes such as routers and switches. In a mesh topology, if any cable or node fails, there are many other ways for two nodes to communicate. While ease of troubleshooting and increased reliability are definite pluses, mesh networks are expensive to install because they use a lot of cabling. Often, a mesh topology will be used in conjunction with other topologies (such as Star, Ring and Bus) to form a hybrid topology. Some WAN architecture, such as the Internet, employ mesh routing. Therefore, the Internet allows sites to communicate even during a war.

There are two types of mesh topologies: full mesh and partial mesh:

Mesh Topology Mesh topologies involve the concept of routes. Unlike each of the previous topologies, messages sent on a mesh network can take any of the several possible paths from source to destination. (Recall that even in a ring, although two cable paths exist, messages can only travel in one direction.) Some WANs, most notably the Internet, employ mesh routing.

A mesh network in which every device connects to every other is called a full mesh. As shown in the illustration below, partial mesh networks also exist in some devices which are connected only indirectly to others. 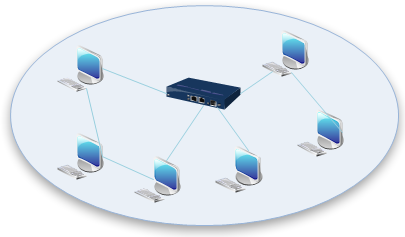 You can find more symbols for WAN diagrams here.