Part 1: What is a Package Diagram?

Package diagrams can be defined as structural UML diagrams that show the organization and arrangement of various UML elements in packages. A package that is the building block of a package diagram, is a grouping of related model elements. These model elements can be diagrams, documents, classes, or even other packages. A package is represented by a file folder symbol in the diagram with nested elements that can have a hierarchical arrangement.

Package diagrams reflect the organization of packages in the system and their elements. In the implementation phase, packages are translated as namespaces.

Package diagrams have many applications in various types of systems and projects. The most common purpose of using package diagrams is an organization of use case diagrams and class diagrams. They are also used to provide a visual organization of the layered architecture within any large-scale software system. Package diagrams also clarify the import and access dependencies between different elements like packages, classes, and components.

The versatility of package diagrams allows us to illustrate both structure and dependencies between subsystems or modules through these diagrams. These diagrams also contain packages that have use cases showing the functionality of a software system. The dependencies between these packages are represented by labels or stereotypes, indicating the communication mechanism between the layers.

Package diagrams are used in large-scale systems to picture dependencies between significant elements in the design and depict a compile-time grouping mechanism.

Package diagrams are handy in software development, especially in object-oriented projects. They allow encapsulation and the grouping of different artifacts to make the system easy to understand, execute and maintain. Other benefits of the package diagram are:

Here are the essential components you'll find within a package diagram:

The package is a namespace that groups logically related elements together within a system. This is the building block of any package diagram. Each element that is included in the package must be packageable and have a unique name.

Dependencies are visual representations of dependability or influence of one element to the other element or set of components. Dependencies are divided into two groups.

Access dependencies show that one package requires assistance from the functions of another package.

Import dependencies show that functionality has been imported from one package to another. 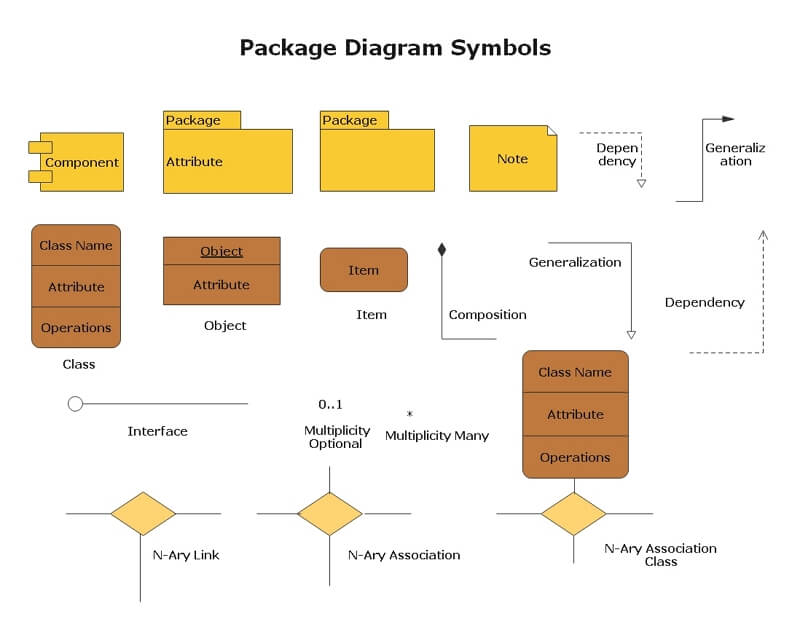 Another way of classification of dependencies can be done on other bases as well.

This kind of dependency exists when a given named element requires another element for its full definition and deployment.

Abstraction relates to two elements that represent the same concept at different levels of abstraction within the system.

Deployment is another dependency that represents the deployment of an artifact to a deployment target.

Subsystems are used for system decomposition, which various parts of the system can represent according to specification and implementation.

Part 4: How to create a Package Diagram in EdrawMax

EdrawMax is a leading drawing software. It has a wide range of templates and symbol libraries that support quick and accurate package diagrams. Here are the steps to create a package diagram in EdrawMax. 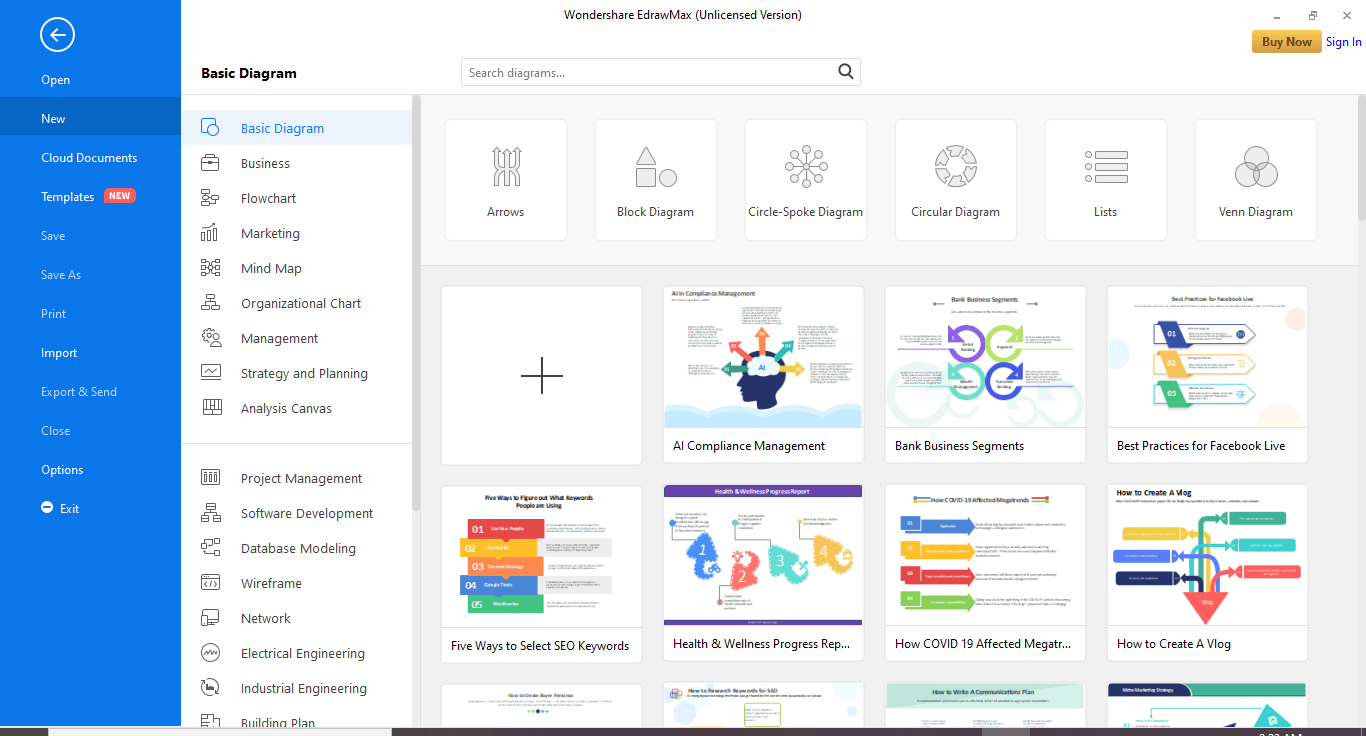 Step 2: On the navigation pane on the left side of the screen, click Software development>UML Modeling and wait for the templates to load. Then, choose a free template or click the + tile to create the diagram from scratch. 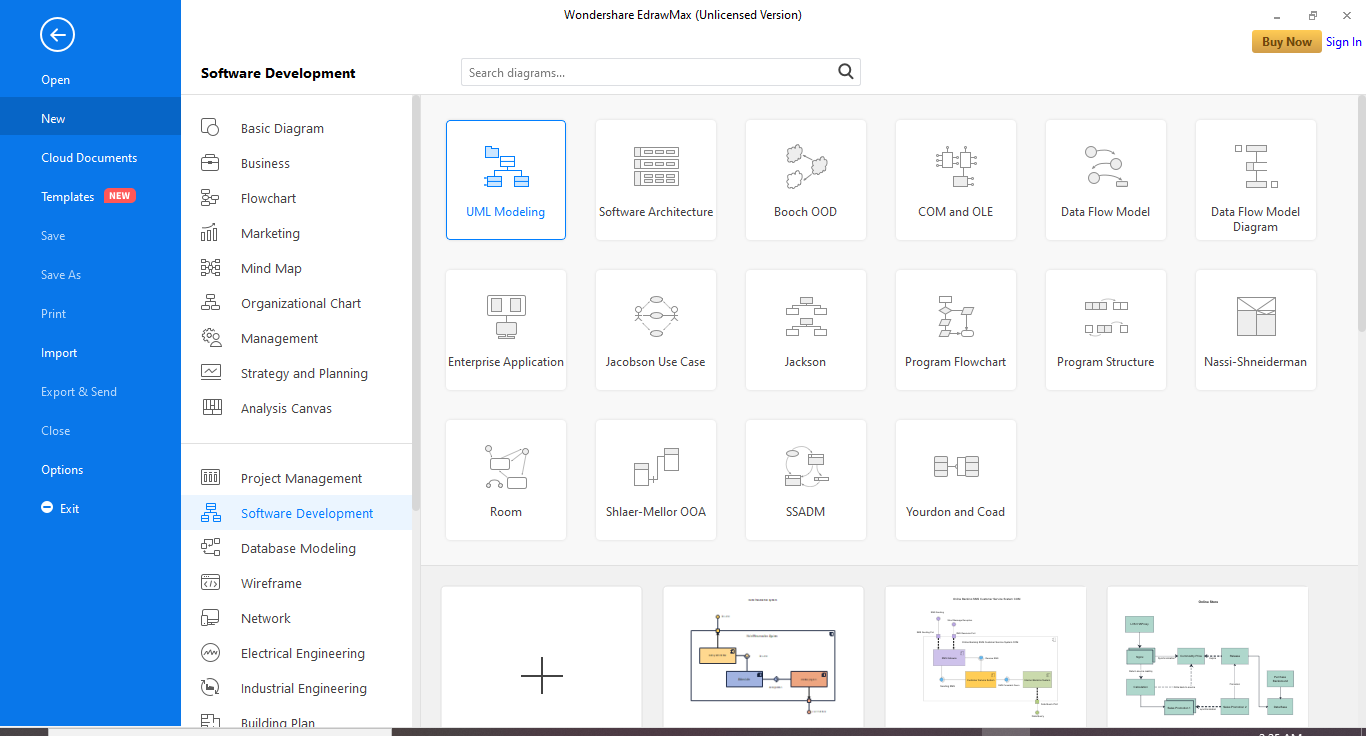 Step 3: When you click on a template, a pre-drafted diagram will appear on the canvas, and you can use it according to your requirements. 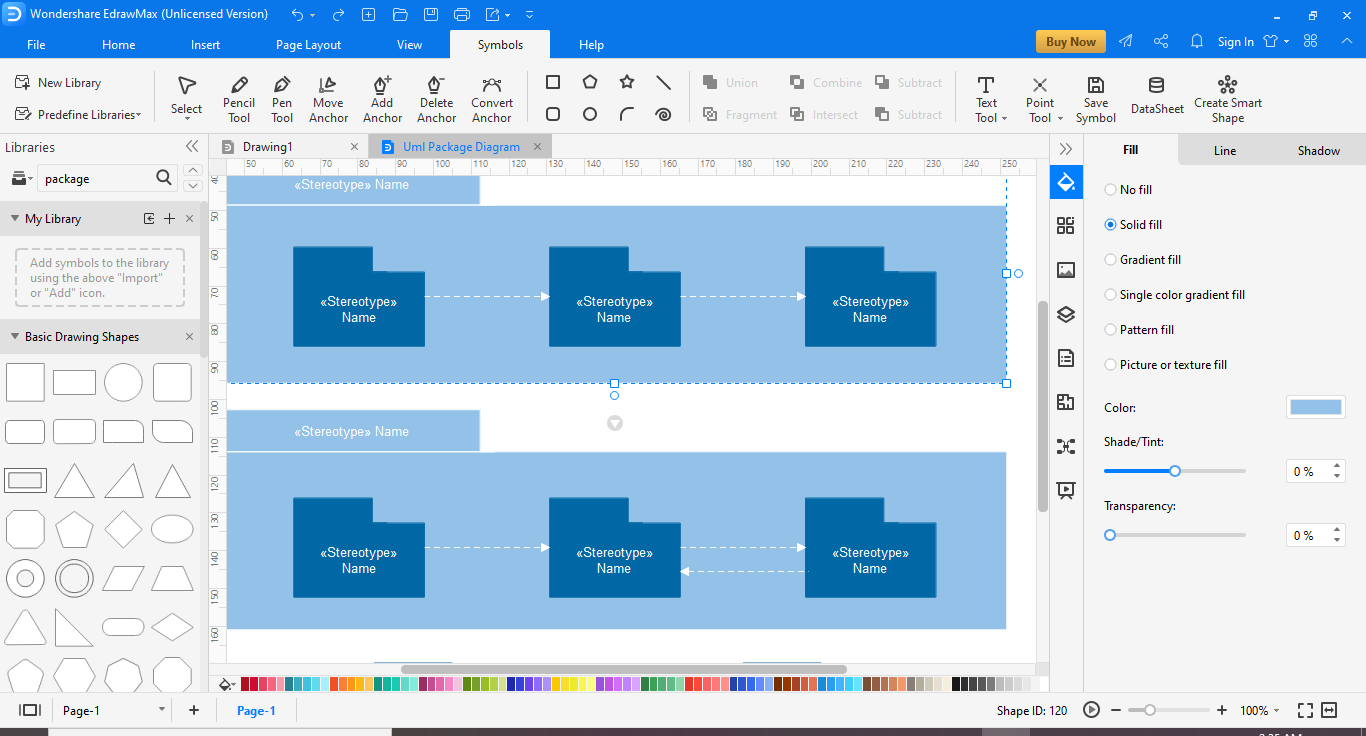 Step 4: To create the diagram from scratch, you can use the symbol library for symbols, drawing, and other visual tools. First, click on the icon next to Symbol Library on the left side of the screen to search for more symbols and icons. Then, scroll down to UML Modelling and select the required library. 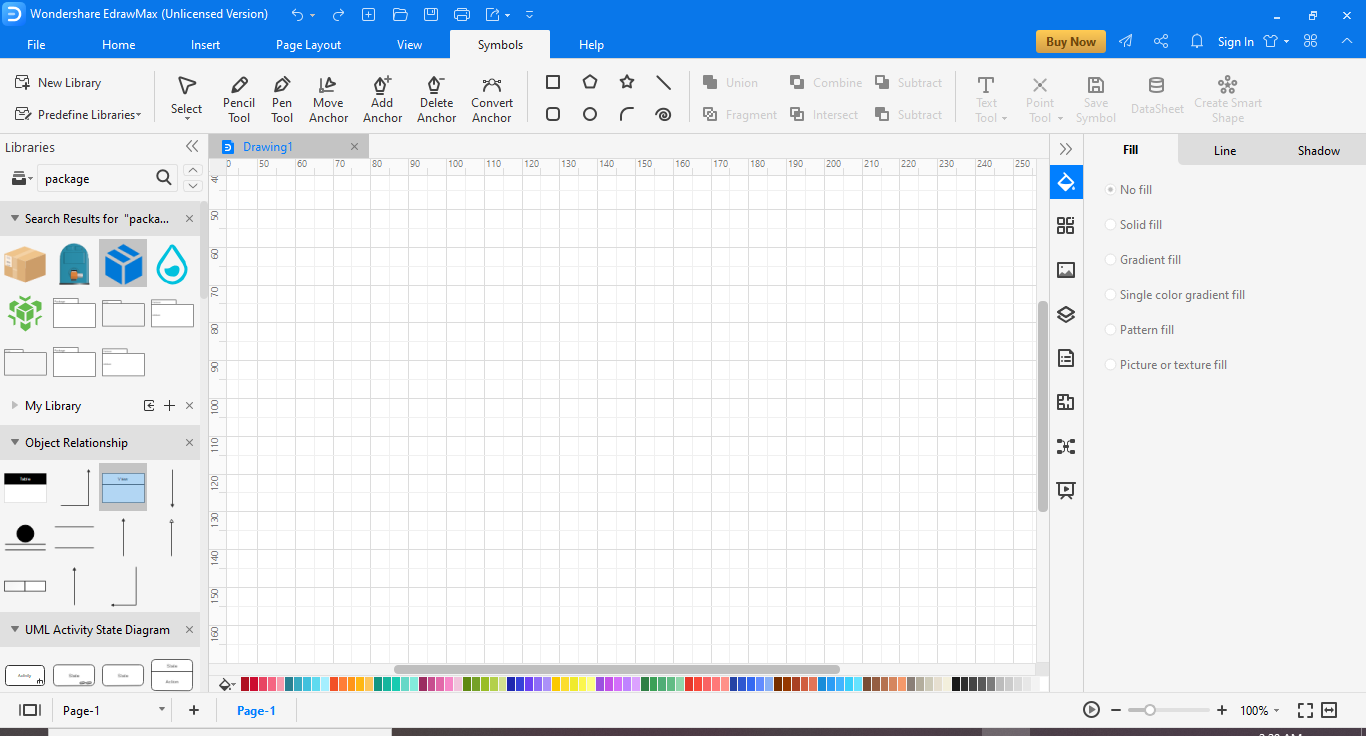 Step 5: Once you are satisfied with the results, save your File, and you also have options to export it to other formats like Excel, Word, or PDF. Click on File and then go to Export. 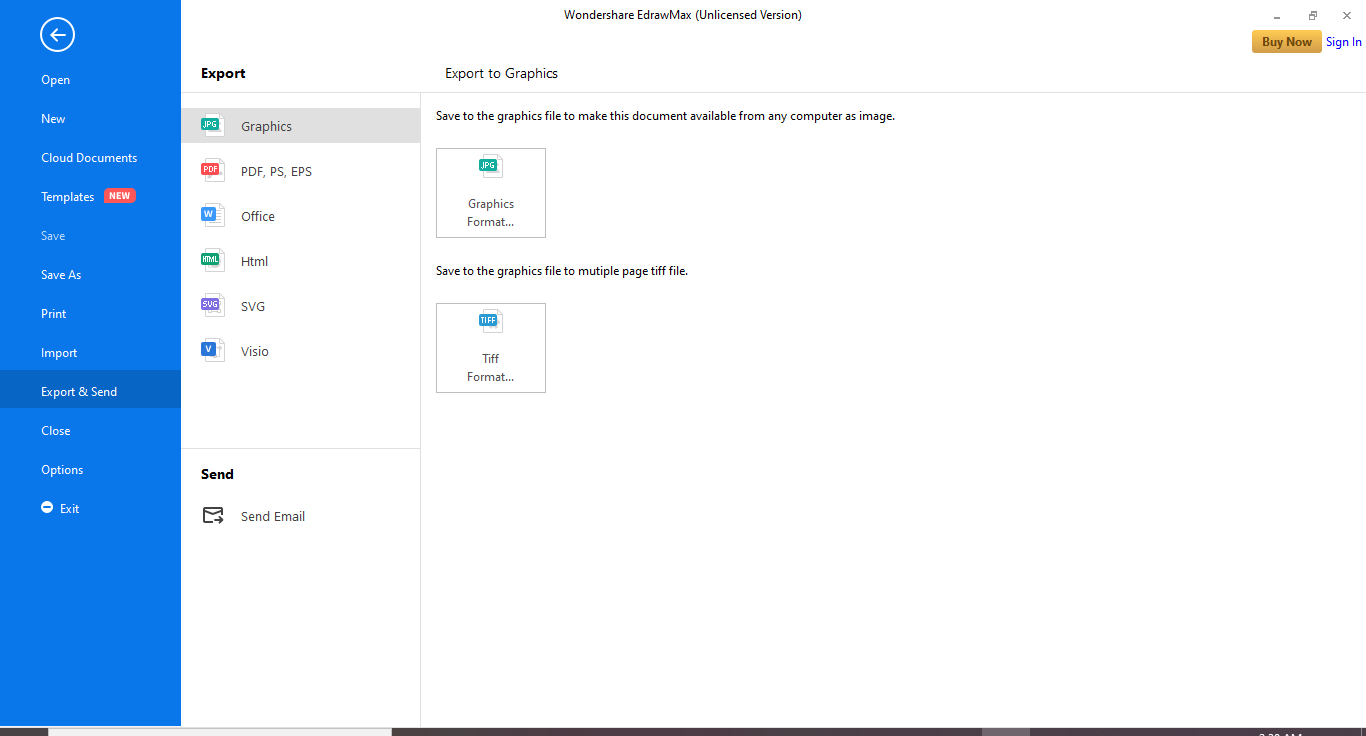 Package diagrams can be created at different levels of the project. Creating package diagrams differs based on the requirement and the level of details included in the package diagram. However, the general guidelines are the same for every situation.

Part 6: Who Can Use Them and How 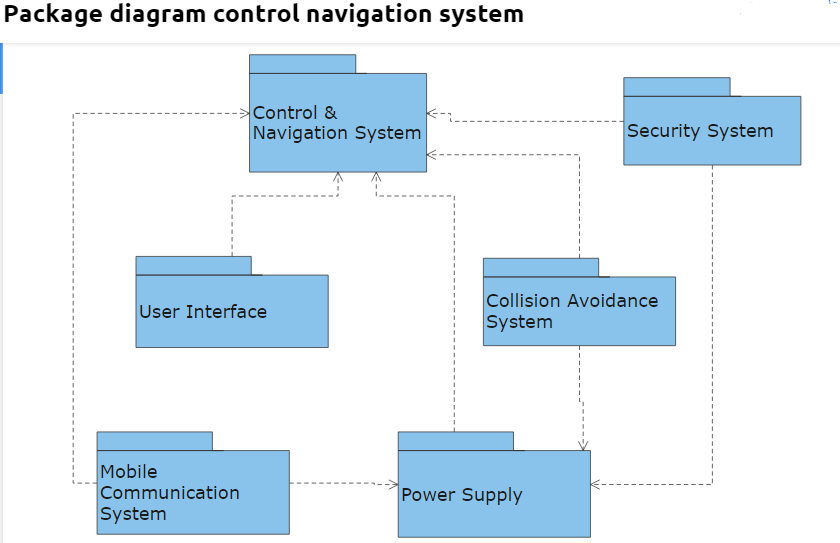 This is an example of a package diagram that is representing a control navigation system. In this diagram, the interdependency of different packages on each other is shown. The package names show that this is a very high-level package diagram. It simply represents a user interface package, but the details of the contents included in the interface are not shown. 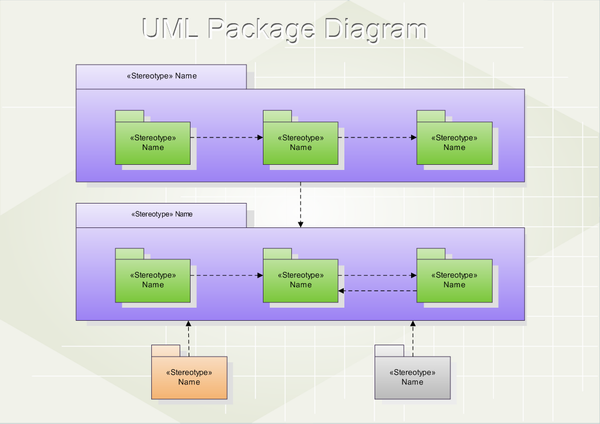