IDEF is based on the Structured Analysis and Design Technique (SADT), a graphical approach to system description, introduced by Douglas T. Ross in the early 1970s. Since then, system analysts at Softech, Inc. have refined and used SADT in a wide variety of problems. In 1981, the U.S. Air Force Program for Integrated Computer-Aided Manufacturing (ICAM) standardized and made public a subset of SADT, called IDEF.

IDEF0 diagram was originally used to apply structured methods to better understand how to improve manufacturing productivity. IDEF0 was initially created at Northrop Corporation in 1966, and first available commercially by SofTech in 1972. An IDEF0 activity diagram contains one level of decomposition of a process. Boxes within a diagram show the sub-processes of the parent process named by the diagram. Arrows between the boxes show the flow of products between processes.

Context diagram - The topmost diagram in an IDEF0 model.

Node trees - Tree-like structures of nodes rooted at a chosen node, and used to represent a full IDEF0 decomposition in a single diagram. 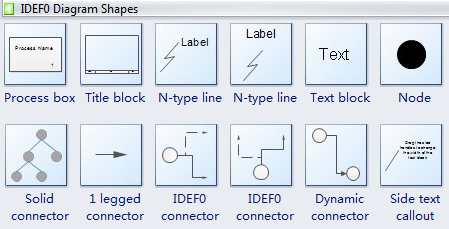 The Benefits of Using IDEF0 to Model Business Processes

The IDEF0 modeling technique consists of a graphic language and a modeling process that can be used to develop a rich process description. It is an intuitive way to define, analyze and document the business as a whole and the processes of the business.

The IDEF0 notation was standardized in 1993 by the National Institute of Standards and Technology of the United States Department of Commerce and is a public domain methodology. IDEF0 is a subset of the complete IDEF0 system modeling methodology which includes process and information modeling.

There are a number of business process and information modeling notations around. Most of these are part of proprietary methodologies developed by consulting firms.

IDEF0, being in the public domain, is dismantling the Tower of Babel to the point where a model's main purpose and communication can now be achieved.

IDEF (Integrated Definition) diagrams were introduced in 1981 as part of the Integrated Computer-Aided Manufacturing (ICAM) project. There are numerous IDEF methods, but two of them serve as the basis for business process models: the IDEF0 method that focuses on activity modeling and the IDEF3 method that accomplishes process description and can be used to rapidly generate discrete-event simulation model specifications (Mayer et al., 1998). The IDEF0 method is designed to model the decisions, actions, and activities of an organization or other system and is targeted to communicating and analyzing the functional perspective of a system (Mayer et al 1998).

Perhaps the main strength of IDEF0 is its simplicity, as it uses only one notational construct, called the ICOM (Input-Control-Output-echanism). IDEF3 describes processes as ordered sequences of events or activities. As such, IDEF3 is a scenario-driven process flow modeling technique, based on the direct capture of precedence and causality relations between situations and events (Mayer et al 1998). The goal of an IDEF3 model is to provide a structured method for expressing the domain experts' knowledge about how a particular system or organization works (as opposed to
IDEF0, which is mainly concerned with what activities the organization performs). Similar to IDEF0, the main strength of IDEF3 is the simplicity of its notation, which relies on only one basic construct, called the UOB (Unit of Behavior).

It's easy to start IDEF flowchart from existing examples or templates. Right in the software, you can find well-built IDEF flowcharts that you can use.

How to Design a Flowchart