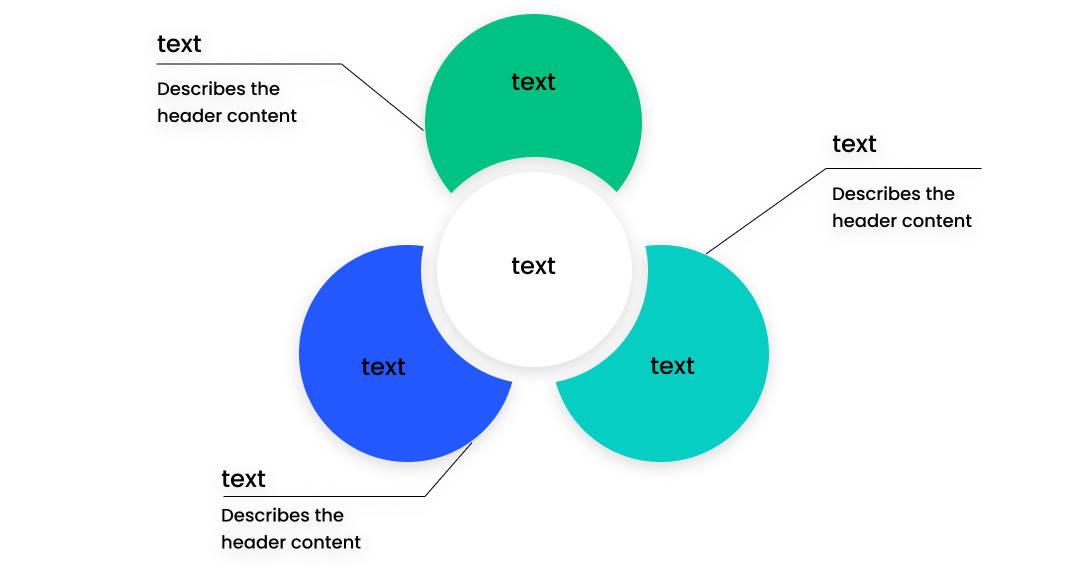 Why EdrawMax to Make Your Venn Diagrams?

For analysis: Venn diagrams fulfill the overall goals of market analysis. They may help you to understand the target market. 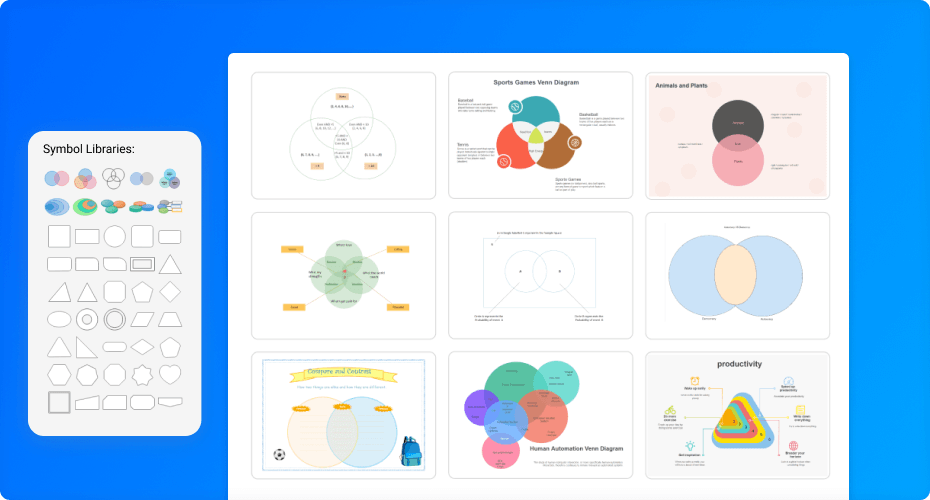 Creating Venn diagrams is a breeze

High-quality templates: EdrawMax provides you with a firm foundation with a wide range of free, designer-made Venn diagram templates. Use them right away or build more upon this foundation easily.

Customizable symbols: What is simpler than a drag and drop interface? You can use the intuitive drag and drop for all Venn diagrams in EdrawMax. Spend your time on your logic because the EdrawMax Venn diagram maker is here to cover for you in the drawing. 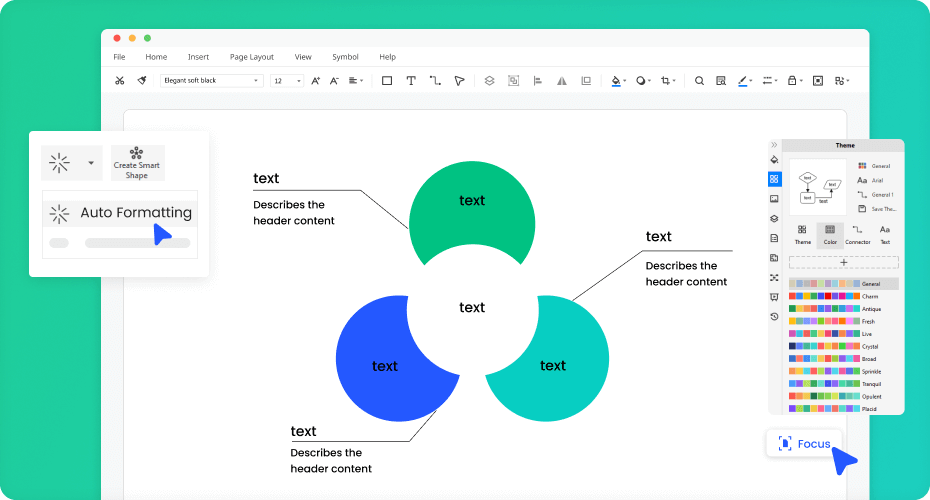 Collaborate with your team effectively

Seen by the world: Sharing is caring! Share your diagrams with the community through the template library and help them. You can also share your work on social media right from the EdrawMax. 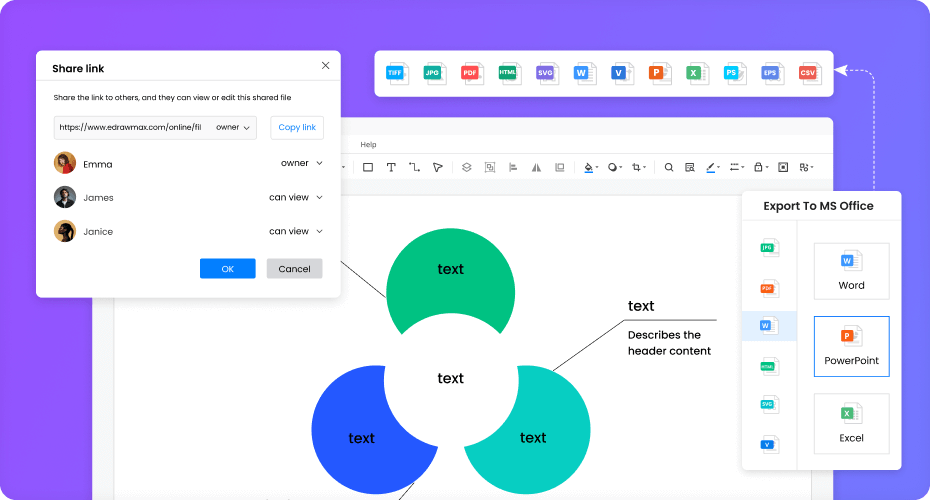 Present like a pro: I have made my Venn diagram, but how do I present it to my class? Well, click the presentation button from within the EdrawMax interface, and Voila! You are live.

Embed with no fuss: You can also export the Venn diagrams along with 280+ other diagram types for education and learning. Embed these diagrams in your reports, graphic organizers, and presentations with a few clicks.

Print with ease: You can easily print high-resolution Venn diagrams with EdrawMax Venn diagram maker with their customized settings. 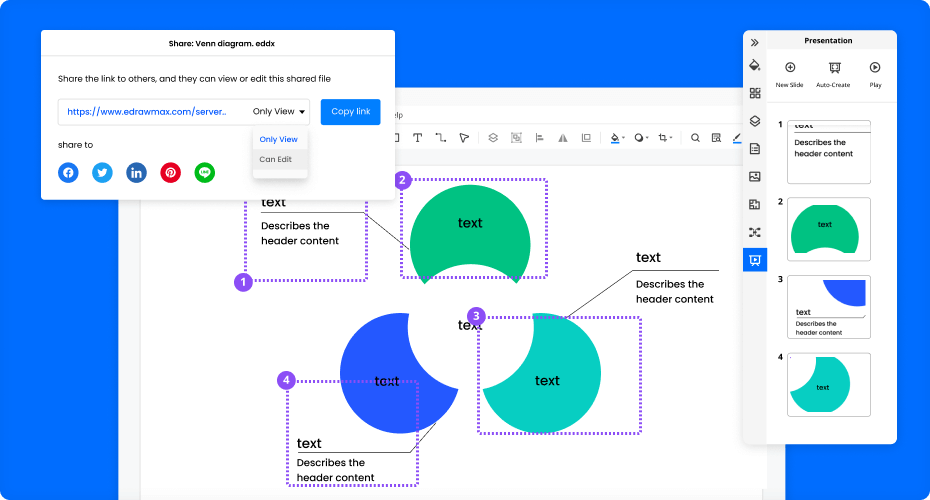 The best thing about EdrawMax is that one can easily choose from a variety of templates around. This Venn diagram maker comes with a number of accessible functions on the screen, which helps one customize the Venn Diagram without any confusion. Apart from the ease of use, the one thing about this platform that makes this a favorable option is that it helps create professional-looking Venn diagrams. When I first started to use it, I found some complications, but the easy-to-use videos made everything very clear. I recommend this Venn diagram maker for all your professional-looking diagrams.

As a mathematics teacher, my job dictates me to work on several Venn diagrams. I started using EdrawMax a long time ago and have found it the best online Venn diagram maker. This tool has a number of template options that one can look through and explore as per the requirements. Apart from being the best Venn Diagram maker currently in the market, EdrawMax allows you to create the flowcharts or org charts needed for your presentation. I have even recommended this Venn diagram tool to several of my students who went ahead and got the premium subscription.

The templates offered by Edraw are so well crafted and easy to use that all you have to do is choose the basic template and then fill in the details as required for the elements in the Venn diagram. I found that the interface could have been a little better, but when it comes to the feature it offers, I think that when it comes to designing the Venn diagrams, Edraw is easily the king in the market. It enriches the data visualization and provides a better understanding of things around.

How to Make a Venn Diagram? 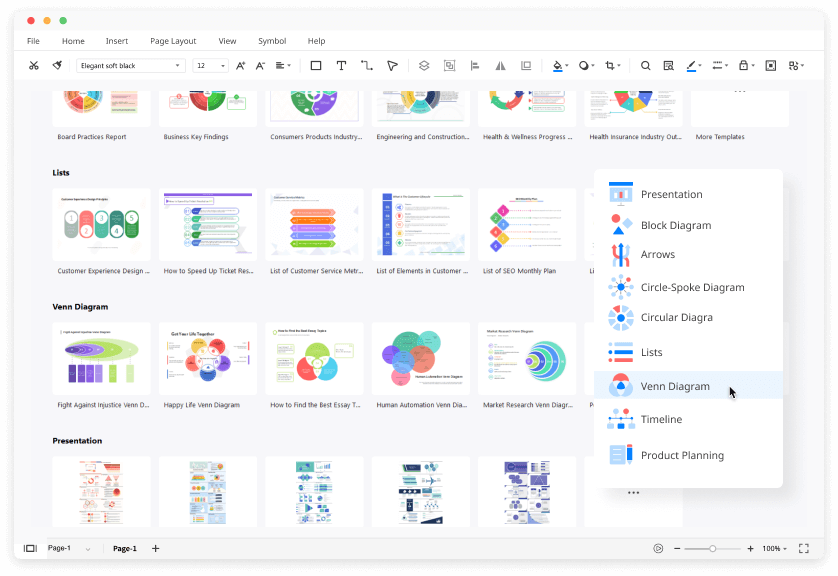 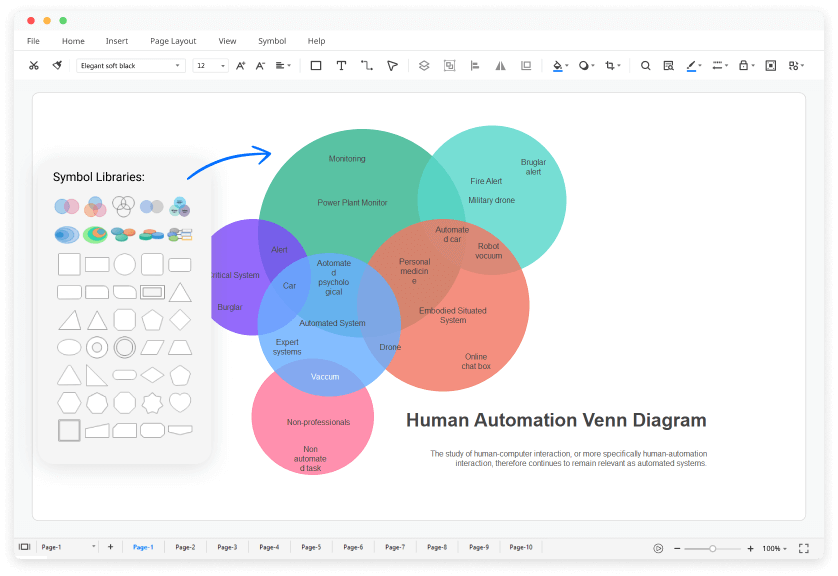 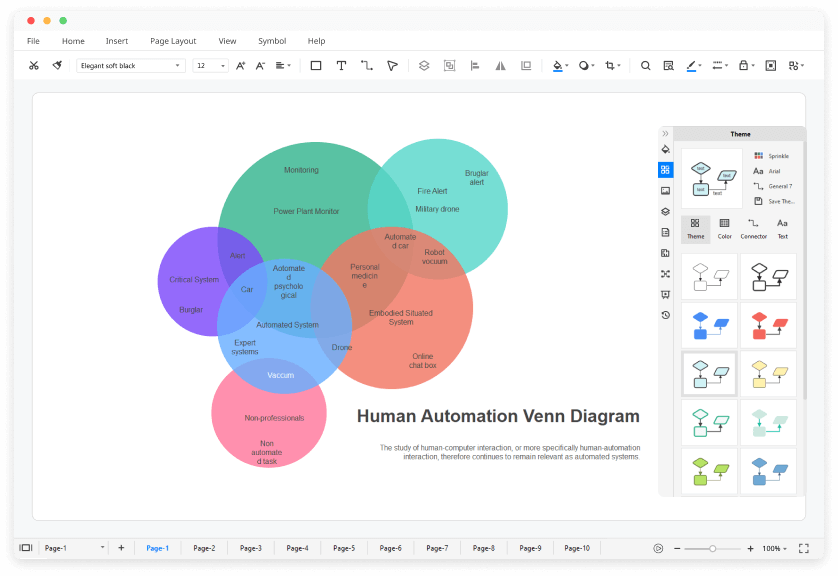 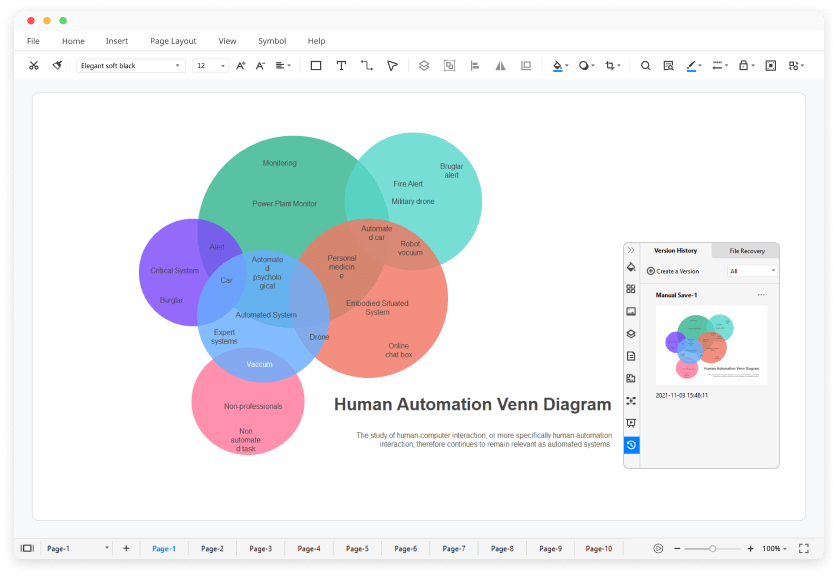 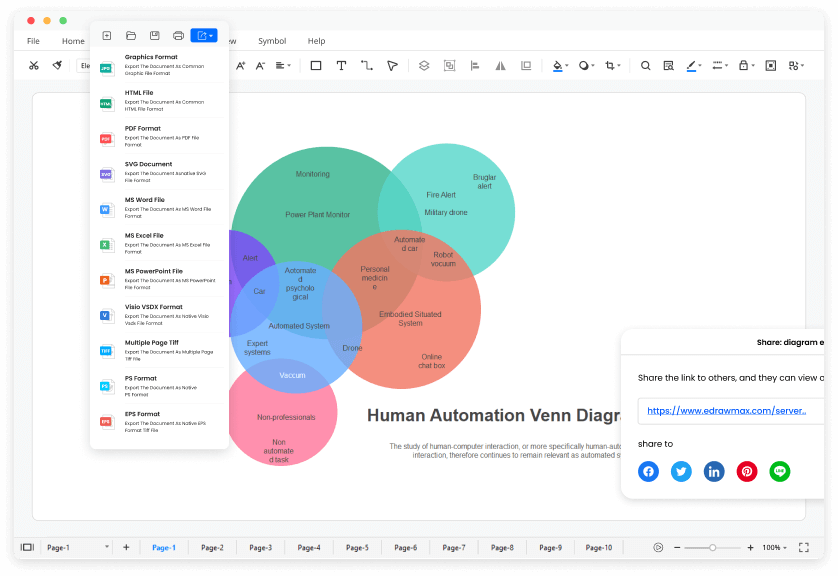 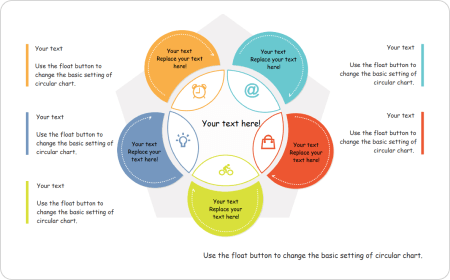 Venn Diagram Example
Venn diagram example shows the relationship between and among sets, groups of objects that share something in common. 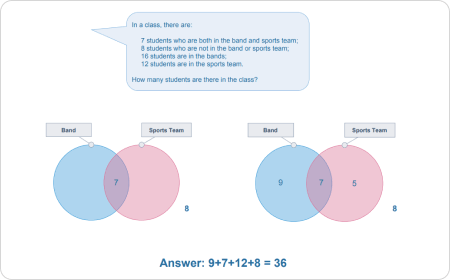 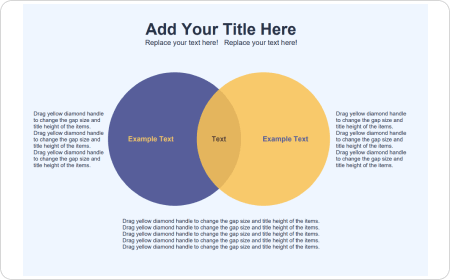 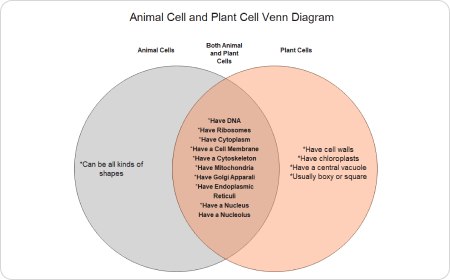 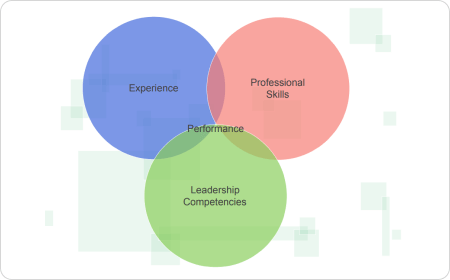 3-Circle Venn Diagram
Three circles Venn diagram features three different sets and the elements of these sets and how they influence each other. 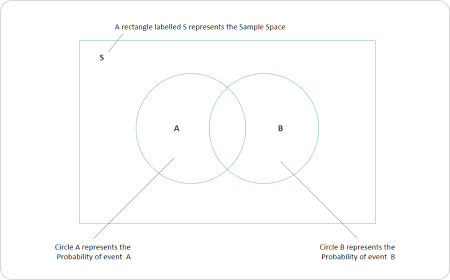 Venn Diagram Probability
The Venn diagram probability depicts one or more circles inside a rectangle that describes logical relations between events.
More Templates

How can I share my Venn diagram with others who don't use EdrawMax?
When your Venn diagram is complete, you can post it on social media, publish on Edraw Template Community, or export the file as Word, Excel, PowerPoint, Visio, PDF, SVG, PNG and JPG. EdrawMax is dedicated to delivering a superior user experience.

Is EdrawMax’s Venn diagram maker free?
YES! It is free to create different Venn diagrams in EdrawMax. There are free templates, symbols, and editing tools for making Venn diagrams. Just download it and try EdrawMax now. You will love it right now.