Posted by James Freeman | 06/25/2021
Perfect SSADM Diagramming software with rich examples and template. Edraw is ideal for software designers and software developers who need to draw Jacobson's Use Case Diagram

SSADM (Structured Systems Analysis And Design Method) is another method dealing with information systems design. It was developed in the UK by CCT (Central Computer and Telecommunications Agency) in the early 1980s. It is the UK government's standard method for carrying out the system analysis and design stages of an information technology project.

SSADM has been traditionally used for the development of medium or large systems. However, one variant of SSADM is "Micro SSADM" which is for small systems. SSADM starts from defining the information system strategy and then develops a feasibility study module. These are followed by requirements analysis, requirements specification, logical system specification and a final physical system design.

Edraw contains special shapes and settings for creating SSADM Diagrams. Use case diagrams illustrate how the outside world interacts with elements of the application system.

In Edraw Professional, the SSADM template and shapes are in the Software folder. 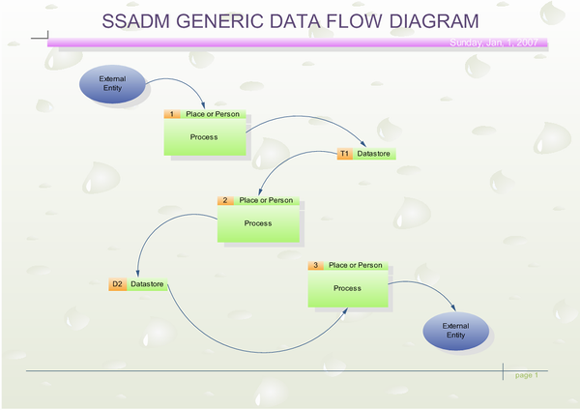 Unlike rapid application development which conducts steps in parallel, SSADM builds each step on the work that was prescribed in the previous step with no deviation from the model. Because of the rigid structure of the methodology, SSADM is praised for its control over projects and its ability to develop better quality systems.