This five forces chart, also called the Porter's five forces tool, is a simple but powerful tool for understanding where power lies in a business situation. It is originated from Michael E. Porter's 1980 book "Competitive Strategy: Techniques for Analyzing Industries and Competitors." Since then, it has become a frequently used tool for analyzing a company's industry structure and its corporate strategy. Porter's five forces include - three forces refer to competition from external sources: the threat of substitute products or services, the threat of established rivals, and the threat of new entrants; and two forces from internal threats: the bargaining power of suppliers and the bargaining power of customers. Generally, the tool is used to identify whether new products, services or businesses have the potential to be profitable. However it can be very inspiring when used to understand the balance of power in other situations. 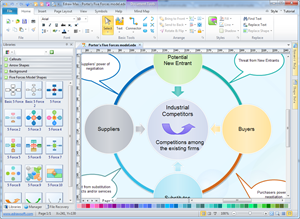 Using Edraw, it's very easy to create a Five Forces Chart. It's designed with a quick-start template, which has a large collection of corresponding shapes and examples, helping you quickly finish the designing. The interface is straightforward and easy to use, no obscure commands to learn. The diagram you have designed can be easily printed and exported to other graphic formats with only a single click. It's absolutely the most convenient tool for creating a Five Forces Chart.
Download Five Forces Chart Software 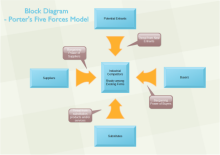 The right Five Forces Chart example is elaborately designed to benefit our user. Download it for free. 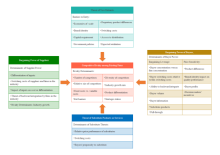