Hans Eysenck was born in Berlin, Germany on March 4, 1916. In 1940 he received his Ph.D in psychology from the University of London. Eysenck worked as a Professor of Psychology at the Institute of Psychiatry, King's College, London, from 1955 to 1983. He was a major contributor to the modern scientific theory of personality. The two personality dimensions, extraversion and neuroticism, were described in his 1947 book Dimensions of Personality. It is common practice in personality psychology to refer to the dimensions by the first letters, E and N.

According to Hans Eysenck, personality is the sum-total of the actual or potential behavior-patterns of the organism, as determined by heredity and environment. It originates and develops through the functional interaction of the four main sectors into which these behavior-patterns are organized". In other words, personality is one's whole character and nature. Simply speaking, it is what makes who you are and what makes what you do.

This diagram is characterized by vector smart shapes with floating quick buttons. It is editable and printable. You can transfer it into many other formats including PowerPoint, PDF and JPG. By applying another theme, its appearance changes at one click. 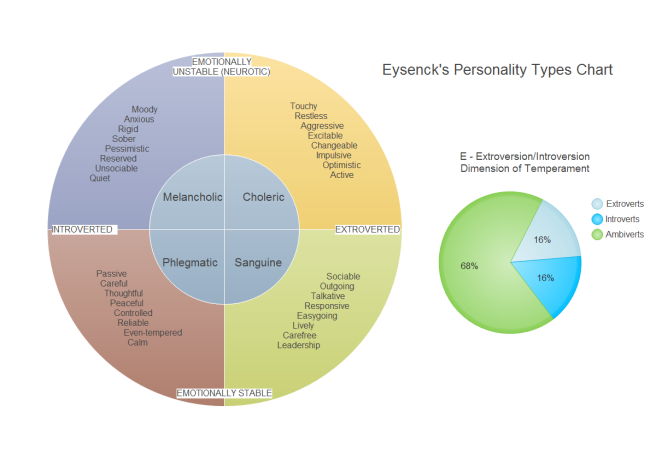