Posted by James Freeman | 12/23/2019
Cross-functional flowcharts are used to show the relationship between a business process and the functional units (such as departments) responsible for that process. Below is a simple instruction on how to create a cross-functional chart: 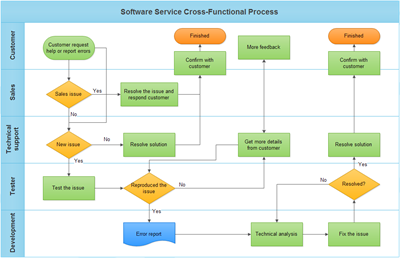 What does a cross-functional chart do?
Cross-functional map shows the relationship between a business process and the functional units (such as departments) responsible for that process. It tells what activities people do, and which departments they belong to. When a basic flowchart describes a process in which a number of different people, departments, or functional areas are involved, it is sometimes difficult to keep track of who is responsible for each step. A useful additional technique for tracking this, and for analyzing the number of times a process is 'handed over' to different people, is to divide the flowchart into columns. For it looks like swim lanes in a swimming pool, it can be also called "swim lane flowchart".

Cross-functional map presents a clearer overall picture of a process by describing activities from different departments, which helps to find out the unreasonable parts of a process, and whether there are buck-passing circumstances. The departments with different culture, scale, and work efficiency always need to have frequent interactions, thus you need to take extra attention on the demarcation point between them. The cross-functional flowchart usually provide a good basis for process improvement and process rebuilding.

Who Can Benefit from Cross-functional Maps


Steps:
1. Define the scope of the process, find out the start and the end point, and mark it with a clearly defined output or event.
2. Usually you need to recognize activities, important outputs, and latency time in your process from the end to the beginning. For a new process, we strongly recommend you to start identifying from the end. But for the reconstruction of an existing process, we normally start recognizing from the beginning.
3. Find out departments that are responsible for each activity in the process.
4. Divide the chart into swim lanes, one swim lane represent a department. Departments which have close relationships can be put together.
5. Start to track from the end to the beginning, put the sub-contents in sequence, and place them in each department they belong to respectively at the same time.

1. The swim lane in the chart can represent any functional unit, such as people, positions, entity, or other companies, not only for departments.

2. If there are disagreements in the drawing group, solve the problem first, so that the final chart can be approved by all people. If you leave them unsolved, they will become potential troubles that might cause conflicts later.

3. When all the elements are positioned and approved by all the group members, it's better to redraw the chart to improve the readability.

Get Started! You Will Love This Easy-To-Use Diagram Software.