Use Gantt Chart in Project Management

What is Gantt Chart

Gantt Charts are a way to visually show progress of a project. Management of a project becomes easier if it is viewed as small manageable items where the dependencies are graphically depicted, parallel processes are discovered, the overall processing time determined and progress tracked. The tasks of a project can be quite complex and dependent on each other. With Gantt chart, a vivid project management tool, all subtasks of a task can be viewed graphically. Find more about the significance of Gantt chart in project management.

Reasons to Use Gantt Charts in Project Management

Gantt charts are popular in project management for its various benefits as shown below.

Set Realistic Time Frames: The bars on the chart indicate in which period a particular task or set of tasks will be completed. This can help you get things in perspective properly. And when you do this, make sure that you think about events in your organization that have nothing to do with this project that might consume resources and time.

Avoid Completion Confusion: By providing a visual overview of milestones and other key dates, Gantt charts can offer a more understandable and memorable method of maintaining timescale-based tasks and deliverables whether tracked on a daily, weekly, monthly or yearly basis.

Keep Everyone on the Same Page: Where there is a visual framework for the tasks and goals, there are fewer chances of misunderstanding, especially when it comes to highly complicated project. Gantt charts allow all members involved have same information, set mutually understood expectations, and align their efforts with the desired protocol.

Understand Task Relationships: The divided subtasks are related to each other. The completion of the prior task may be the prerequisite of the next one. Gantt charts offer clear vision of the interrelationship of tasks and impact of each task. This can better assure the optimum work flow, maximized productivity and overall project success.

Allocate Resources Effectively: Many Gantt charts also depict the priority rankings and dependencies of various tasks within the project. By being able to look ahead on the Gantt chart, users can clearly discern where resources need to be anticipated, allocated or shared to maximize the use of those resources.

Motivate Your Team: Some teams or team members become more effective when faced with a form of external motivation. Gantt charts offer teams the ability to focus work at the front of a task timeline, or at the tail end of a chart segment. Both types of team members can find Gantt charts meaningful as they plug their own work habits into the overall project schedule.

Edraw Gantt Chart Software is an easy to use project management and business diagramming program used by a variety of companies. The latest version of Edraw has added the Gantt chart templates, which allow the users to create great-looking Gantt charts and project schedules in minutes. 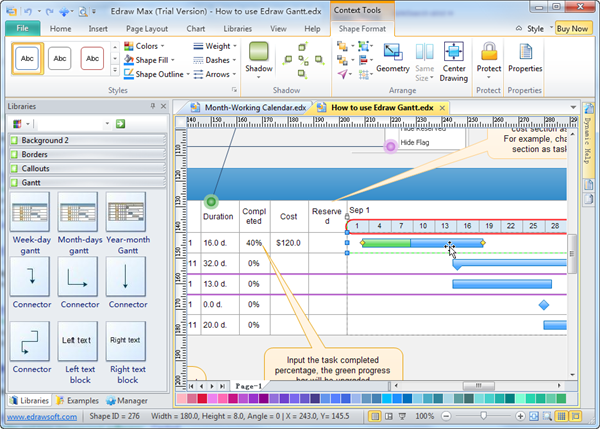 Discover why Edraw is the easiest Gantt chart software.

Click the following link to view: Video Tutorial - How to Create a Gantt Chart

A Gantt chart template helps you get started in the fastest way! See some examples below.

8 Project Management Tools You Should Know

A professional Gantt Chart tool to schedule, manage, and track your projects in real-time. Easy, light and powerful.